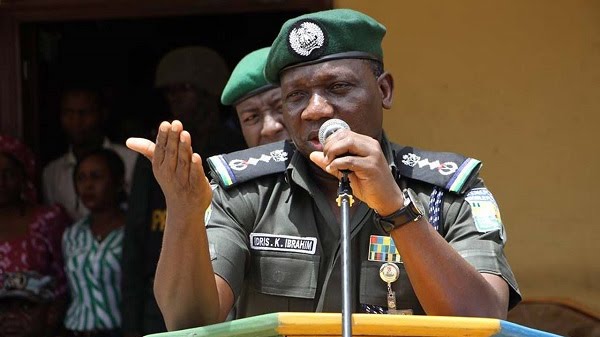 Watch the almighty inspector General of Police Ibrahim Idris Kpotun been electrocuted by his own speech. Can’t read??

A tending video of Ibrahim Idris, inspector-general of police (IGP), struggling to read a speech, has surfaced online.

In the video, Idris finds it difficult to pronounce the words, as he constantly repeats the words “I mean’ and ‘transmission”

Idris was said to have been caught in the “embarrassing” video tweeted by Voice of Liberty, on Monday, when he visited Kano to commission the police technical intelligence unit in the state.

Investigation by TheCable showed part of the video was doctored, though that did not cover up for his mistake, just that it was repeated over and again.

After several attempts to get his speech right, the IGP, struggling with his paper, apologised to his audience.

However, Ibrahim’s struggle did not end there. A man in suit joins him to help hold down his script, and even helped with the pronunciation of the words. But this didn’t make the reading any better for the IGP.

“All effective the transmission, other transmission, I can state without contradiction that I have commissioned what?” he continued.

Below is the video

Kindly SUBSCRIBE to our YOUTUBE Channel for more interesting Videos. Two Clicks away to get it Done.