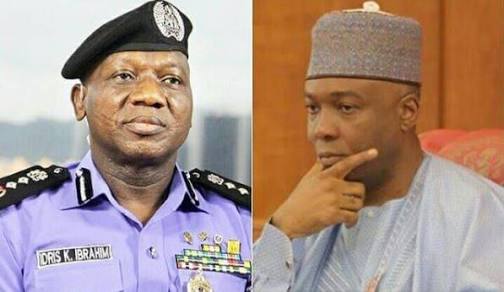 The attention of the Nigeria Police Force has been drawn to Press Statement credited to the Senate President, Federal Republic of Nigeria, Senator Abubakar Bukola Saraki, CON of “PLOT AGAINST HIM BY IGP”.

2. The Nigeria Police Force is shocked at the unbelievable claims, unverifiable allegations and unfounded accusations being peddled against the IGP by the Senate President, accusing the Inspector General of Police, IGP Ibrahim K. Idris, NPM, mni of plot and strategies against him to settle scores.

3. The Force therefore wishes to categorically state that, there is no iota of truth in the allegation and false assertion by the Senate President of plot against him by the IGP to implicate the Kwara State Government and the Senate President in any criminal matter. Until investigation is concluded, any person (s) or group(s) who tries to interfere in the investigation process by action or utterances is committing an offence.

5. Consequent upon the public confessions of these vicious and notorious killer squad to the killings in cold blood of more than Eleven (11) innocent people in Kwara State and other States of the Federation, the statutory procedure and practice in the Force is that such a heinous crime and capital offence is transferred to the Force Headquarters for further investigation. This is to enable a thorough and discreet investigation into the crime.

6. However, it is pertinent to state that, there is no vested interest by the Inspector General of Police in the ongoing investigation into the several murders committed by this killer gang, other than ensuring that justice prevails in the matter. Nobody, no matter how highly placed would be allowed to interfere or obstruct Police investigation to pervert the course of justice.

7. It is also imperative to let the public know that last year, suspects arrested over the mayhem and killings of innocent people in Ile-Ife, Osun State and those arrested in Southern Kaduna crisis in Kaduna State and suspects arrested in connection with Zaki-biam killings in Benue State were all transferred to the Force Headquarters, Abuja for further investigation before they were arraigned in court of competent jurisdiction. Therefore, transferring this hired assassin gang masquerading as cultists in kwara State to Force Headquarters, Abuja for further investigation is in accordance with Police investigation procedures.

8. It is also important to underscore that the statement credited to the Senate President can dissuade and discourage living victims/deceased families of those who must have been killed by this vicious hired assassin gang from coming forward to give evidence against them.

9. The Nigeria Police Force hereby implores members of the general public to disregard and discountenance the claim of plot by the IGP against the Senate President as a ruse, unfortunate and an attempt to divert Police investigation into the killings of more than Eleven (11) innocent people from kwara State and other States of the Federation in the recent past by the killer squad who operate under the guise of a cult group.

10. The Force will leave no stone unturned and will do everything within the ambit of the law to ensure justice in this matter, no matter whose ox is gored.