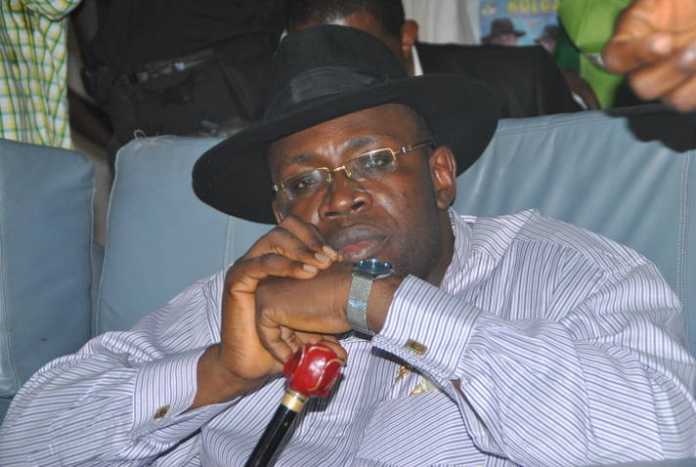 Gov Seriake Dickson of Dickson on Saturday allegedly addressed the seven securitymen arrested over a theft incident at his Deputy Chief of Staff’s office and directed them to keep sealed lips over the incident.

Sources at the meeting who do not want his name mentioned said the governor was disturbed about the publicity the incident was attracting to the outgoing administration.

Four personnel of the Nigerian Security and Civil Defense Corps (NSCDC) arrested over a theft incident at Bayelsa Government House YENAGOA have regained freedom and returned to their duty posts.

It was gathered that preliminary findings by the police led investigation indicated that the crime was an ‘inside job’ and cleared the security men on duty of any complicity.

Officials of Bayelsa government who had perpetrated the theft had used the security men as scapegoats to divert attention and under-reported the sum carted away to cover their tracks.

Mrs Christiana Abiakam-Omanu, Bayelsa Commandant of NSCDC who confirmed the development said the NSCDC personnel were questioned and freed by the Police.

“You know whenever something happens, security personnel deployed are usually the first suspects and they were questioned and have since resumed work at their duty posts.

“They are back to work as we speak while the investigation by the police continues, on our own at NSCDC we are conducting our independent investigations and there is no substantial issue to comment on at this time,” She said.

The Bayelsa Police Command had confirmed reports of stealing of large sums of money at the Bayelsa Government House, Yenagoa amidst discrepancies about the amount.

While sources in the Bayelsa Government House who declined to be linked with the issue said that N 800 million was carted , other sources put the missing money at N40 million.

However, the Police Command said the report at its disposal indicate that N3.5 million was stolen by yet to be identified people.

Superintendent of Police, Asinim Butswat, who spoke in a telephone chat said that some arrests have been made while investigation was underway.

It was learnt that a maintenance staff who worked at the office of the Deputy Chief of Staff to Gov Seriake Dickson was arrested alongside the security men on duty when the incident reportedly was noticed on Thursday.

According to Butswat, seven security men comprising three policemen and four Civil Defense personnel on guard duties when the money got missing were in custody and being interrogated.

“On 5th December, 2019, at about 0850 hours, the Command received a report of Burglary and Stealing in the office of the Deputy Chief of Staff, Government House, Yenagoa.

“It was reported that the main entrance door to the office of the Deputy Chief of Staff was broken and the Safe inside the office were destroyed.

“The crime scene was visited by Policemen and it was further revealed that the sum of Three Million Five Hundred Thousand Naira was stolen.

“Three Policemen, four personnel of the Nigerian Security and Civil Defence Corps and one maintenance staff on guard duty at the Governor’s office were arrested.

“They are being interrogated at the State Criminal Intelligence and Investigation Department, Yenagoa,” Butswat said