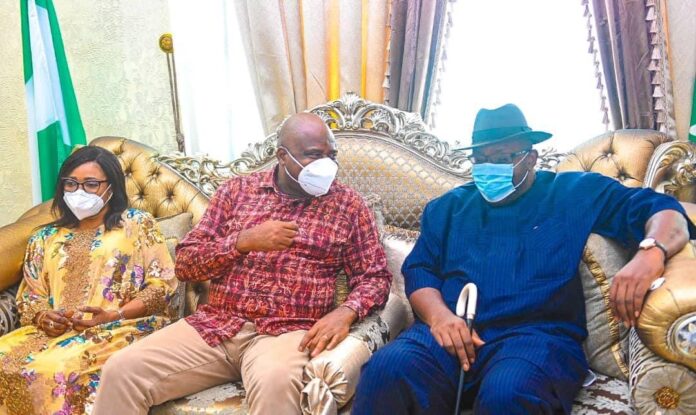 The Bayelsa West Patriotic Front (BWPF), a political body made up of politicians from the People’s Democratic Party (PDP) in Ekeremor and Sagbama Local Government areas of West Senatorial district of the State, has urged Governor Douye Diri not to be deceived by the accolades and encomiums showered on him during the Yelutide by Senator Seriake Dickson and remained committed to the principle of rotation in the senatorial district based on equity, fairness and sense of belonging in the Party.

The BWPF, in a statement issued in Yenagoa, said though the encomium and accolade is an open facts on ground and known by the people of the state that Governor Douye Diri has done well in areas of good governance, peace, security and infrastructural development, the decision of Senator Seriake Dickson to re-echo it is a suspicious moves to curry favour and scuttle the existing rotation agreement in Bayelsa West District.

The National Coordinator of the BWPF, Comrade Owei Ebiagbe from Agge community in Ekeremor Local Government area of the state, in a statement titled “BAYELSA WEST AND THE POLITICS OF 2023 AND 2024” said despite the theatrics being displayed by the Former Governor, Seriake Dickson in his bids to scuttle the existing rotational agreement, Governor Douye Diri should stand firm to uphold the peaceful co-existence in the ruling PDP.

He noted that Gov. Diri must show true statesmanship and upright leadership qualities he is known for in the last two years, “ As a son of AYAMASA community also in Tarakiri clan of the Ekeremor local government area, one who is very conversant with the existing peace accord in the rotational principle which he also helped to canvass while the former governor was openly declaring that he will only complete the unexpired term of senator Lawrence , it will be the hallmark of honor and integrity for him to stay true to his words and his calling as the leader of the state and ensure that no matter whose ox is goo-red he remains firm and uphold the truth of this very unfortunate development as being orchestrated by no less a person than HS Dickson , one who should stand tall on the altar of HONOR but has chosen to fall to the tempting beauties of political office” .

Ebiagbe also noted that “ we want to remind Gov. Douye Diri that , In taking this route, Dickson should be reminded that non can play God . He should be reminded again that God used him to salvage the people when Hieneken attempted to tow this path of dishonor. In the same way a Daniel will rise that will ensure that his submission that he will only complete the term for the Sagbama turn will be a reality .

“But what is more intimidating and of great concern is that the Governor needs to know that his handling of this present situation will surely determine is acceptance and his chances of re-election . Ekeremor and Sagbama people have SET A TRAP FOR HIM and if he falls he will have the entire Sagbama and Ekeremor move against him. His actions in standing tall for truth and upholding the people position will further raise his acceptance as a true and fearless leader and this will give him a second tenure giving his present record “.

“I can authoritatively submit that if the Governor supports H S Dickson irrespective of his victory or failure , Sen. Douye Diri would lose massive political support and will not be re-elected as this will be a tool in the hands of the opposition and this will harm him very deeply . In my opinion, supporting popular policy and actions is what has catapulted him to this present level of acceptance in the state . Any action to the contrary is counterproductive to say the least .2023 and 2024 will be greatly determined by the actions in Bayelsa west Senatorial district and like a tidal wave it will reshape and redefine the politics of the state “.

“It is not in dispute that as we enter into this political season such calls will come up and men of integrity are expected to honor such existing agreements not to further heat up the polity and also to create disunity.In Bayelsa , such agreements in senate and federal constituency rotations abound . In the East both the Senate and federal constituency have such similar rotational principles couched in agreements between the Ogbia, Nembe and Brass people . This is the reason HS Dickson as Governor refused to allow Sen Ben Bruce to return to the senate even though he was absolutely qualified .”

“ Same was done by FMGEJ to his bosom friend Sen Clever Ikisikpo and Sen. Amange . This act though against the spirit of the constitution is one founded on fairness and unity. It cements the spirit of unity among the people .In the West senatorial district, the same rotational principle exist . It is on record that Sen. Heineken Lokpobiri attempted though very unsuccessfully to breach it by asking for a third term but the people, the land and God refused. Under Governor HS Dickson , he was a vocal promoter of this principle . He led the west to ensure that the principle remains strong and not disputed. To this end he organized a meeting of stakeholders to reaffirm its acceptance and implementation.”

“Thus by doing so he puts a toga of moral and extra-legality to it . He went further to bring in Chief Foster Ogola when it was the turn of the Sagbama people for Senate. After four years he still insisted that given the eight years of two terms another Sagbama person should be supported and this saw the election of the incumbent Deputy Governor being returned as the senator to complete the second term for the Sagbama people while Hon. Fred Agbedi remained to complete the eight year two terms for the Ekeremor people. When the Supreme Court declared the duo of the incumbent Governor and Deputy, their respective senatorial seats became vacant occasioning the need for a bye election”

“Thus in the same spirit of honoring the agreement, the people of Ekeremor stood tall and resolute to ensure their son, HE Rt Hon Peremobowei Ebebi was not supported even in his community for his unrighteous attempt to breach the agreement as always seen in some climes. This unethical conduct was expressed even in the east by Sen. clever ikisikpo and chief Amange. In both cases like the west, their ambitions failed as the people and the leadership jointly with the help of God the custodian of covenant ensured that the agreement is respected. It is in the interest of the PDP to honor these agreements in all the political units in the State and allow the overriding will of the people to always prevail because democracy is for the people by the people and for the people.”

“The likes of HS Dickson in civilized climes would not dare to seek for any elective office again from the point he went against his own claims of being a man of honor and will only complete the remaining term of Lawrence and by extension the Sagbama people. As we move closer to the party primaries, the true test of leadership upon the Governor, Senator Douye Diri will be stretched to its limit and his actions will determine is political future with particular reference to how he handles this sensitive issue of his maternal home. There is no dispute to the legal position that all bona fide sons and daughters of Ekeremor and Sagbama are eminently qualified to contest the senatorial and federal constituency seat as long as they meet the constitutional requirements. This is sacrosanct”.

“However, politics being what it is goes beyond certain legal terms . This is the reason why even in the Nigerian context , parties seat discuss and agree to certain extralegal resolutions done to cement and create peace amongst themselves .

This is the same reason that the presidency moves from North to south irrespective of the legal expectations for all free born to vie for the highest office of the land. It is done in pursuant to good relationships, balancing the political offices to give all a sense of fairness .The above underlying reasons are the same premise upon which even in Bayelsa we device for ourself such agreements of rotation to allow for even representation to all communities blocks constituencies and local governments areas”.

Panic as “fetish” substance found in court premises in...