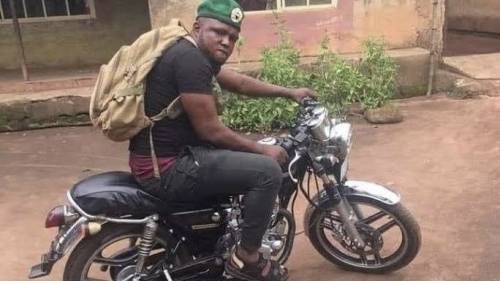 Gunmen have killed a middle-aged man suspected of being one of the Nigerian Army’s spies in the death of Ikonso Don, the late commander of the Indigenous People of Biafra’s Eastern Security Network (ESN).

The victim, whose name had yet to be determined, was gunned down in a village between the states of Imo and Anambra, where he was believed to be hiding, according to SaharaReporters.

NAIJA LIVE TV were able to capture horrific photographs of the victim’s body, which was shot dead along a rural footpath while the shooters fled the scene.

“The victim is alleged to be the informant the military and the police used in getting Ikonso’s location and in killing him. Some said the informant was also a member of the ESN but others said he was a former IPOB member, renounced them and came to the village to hide. But he has now been killed,” a source stated.

On April 26, SaharaReporters claimed that an operation by the Nigerian Army against the ESN and IPOB in Awomama Village in the Oru East Local Government Area of Imo State resulted in the killing of Ikonso Don, an ESN top commander.