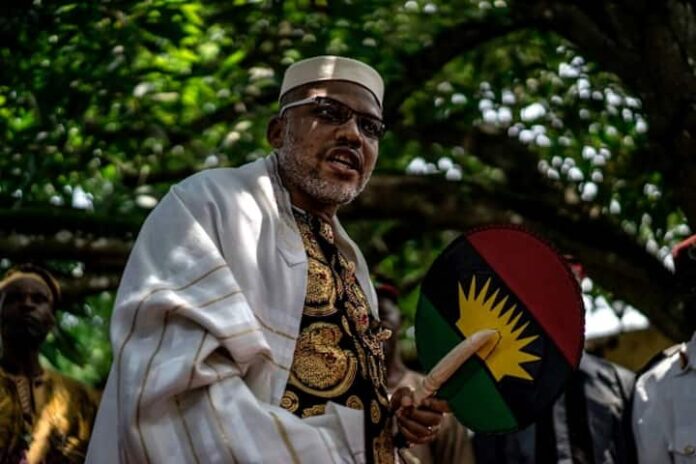 The vice-chairman of the Senate committee on petroleum, upstream, Senator Ifeanyi Ubah has called for Nnamdi Kanu’s release The senator representing Anambra South senatorial district in the Senate said Kanu’s arrest has triggered insecurity Ubah who is contesting to be the governor of Anambra state noted that the politicians have taken advantage of the Kanu situation to cause mayhem.

Senator Ifeanyi Ubah has declared that the immediate release of the detained leader of the proscribed Indigenous People of Biafra (IPOB), Mazi Nnamdi Kanu will end the spate of insecurity in the southeast region. Senator Ubah who is the governorship candidate of the Young Progressives Party, YPP in the forthcoming Anambra gubernatorial election, urged the federal government to critically examine the issues surrounding the arrest and detention of Kanu.

He made the comment during his engagements with Anambra businessmen at the Alaba International Market in Lagos.
Parts of a statement released by his media team read: “In the course of the conversation, some youth leaders used the opportunity of the visit to express their sadness to the senator over the raging issue of Mazi Nnamdi Kanu’s detention and pleaded with him to intervene on the matter.

“The senator in his response assured them that there are ongoing efforts behind the scene at finding a political solution to the problem and also promised to relay their message to the federal government with regards to the need to treat the issue as vital. “The senator at this juncture pleads that the federal government finds a political solution to this. It is our firm belief that if this is done, the present insecurity in Anambra state will come to an abrupt end as the politically sponsored bandits killing people under this guise will have no further excuse at their disposal.”

Meanwhile, ahead of the November 6, governorship election in Anambra state, the Nigeria Police Force says it is ready to deploy 34,587 personnel for the exercise. Usman Alkali Baba, the Inspector General of Police, made this disclosure when he met with various heads of the force recently in Abuja. The police boss stated further that three helicopters, animals, and other equipment would be deployed also for surveillance purposes, to ensure a smooth election.