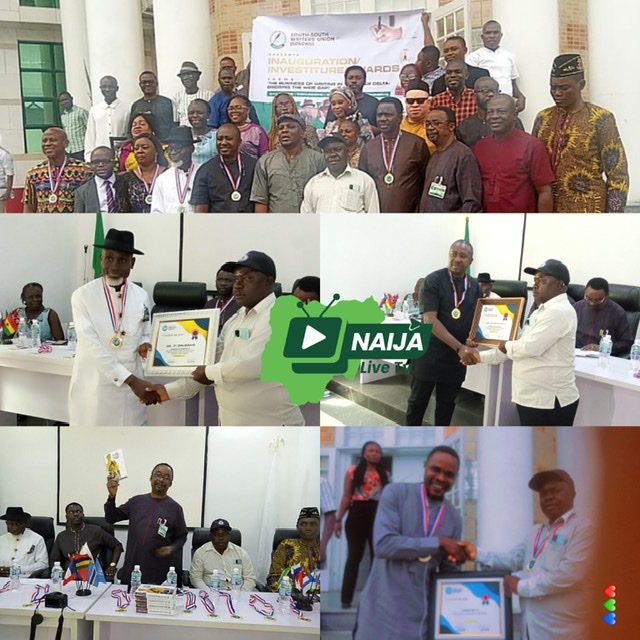 The need for writers of Niger Delta extraction to take their craft beyond their immediate environment through novel branding strategies has been stressed.

Prof Steve Azaiki, Member of the House of Representatives representating Yenagoa Kolokuma Opokuma Federal Constituency,, stated this at the formal Inauguration of the Bayelsa State Chapter of the South-South Writers’ Union (SOSOWU) and Investiture Awards ceremony which took place in Yenagoa, the Bayelsa State Capital.

Prof. Azaiki was conferred as a Patron of the regional writers body (SOSOWU) with the Living Literary Legend of Letters Honour, amongst other right recipients, as he was ably represented by Bishop Mounty Kali Abraham and Engineer Utovie Egba, who called on Niger Delta writers to keep the muse aflame amidst growing challenges plagueing the oil-rich region.

In his opening remarks as Chairman of the Occasion, Chief Lambert Ototo ( who was also honoured as a Patron with LLLL honour), charged the newly inaugurated executive members to make accountability, unity and transparency their watch word as he endorsed the group to keep the flag flying while advancing lierary activities in the region.

Other Literary enthusiasts honoured at the event, for their impact in literary education to the South South public included Prof. Azaiki’s colleague in the lower Green Chamber, representing Sagbama Ekeremor Federal Constituency, Hon Dr Fred Agbedi; the Bayelsa State Commissioner for Education, Dr Gentle Emelah and his counterpart in the Culture and Tourism Ministry, Dr Iti Orugbani, and Ms Annette David West who was also decorated and conferred with the LLLL medal and award

National President of SOSOWU, Chief Alaska Ekele, as delegate from the Delta State entourage, expressed delight over the BAYELSA chapter’s steadfastness and challenged other sister chapters to do same in scope and contents in earnest.

Newly elected Chairman of the Bayelsa State Chapter of SOSOWU, Mr Amatare Mozimo, pledged to keep up the literary sector in the state aflame as he spoke of synergies with critical stakeholders in ensuring that reading and literary literacy are giving a loud boost in the region through the institution of Regional Prizes and Awards and other means.

Earlier on Day One of the Two-Day event, delegate writers had been hosted by the Ekpetiama Kingdom Monarch, King Bubaraye Dakolo, who is an author, orator and activist, as he took the visiting writers on a tour of the historic River Nun written about in the late Gabriel Okaras.poem, ” The Call of the River Nun.”

Others awarded with the LLLL awards were, the member Representing Yenagoa Constituency 3 in the State House of Assembly, Hon.Ted Elemeforo, Hon. Mitemma Obordor (Ogbia Constituency 1 in the BSHA) and Prof. Barclays Ayakoroma of the University of Africa Toru Orua.

NAIJA LIVE TV was awarded by the writers as the “Best South South Blog” of the year 2021.

The occasion was attended by delegates from the other five states of the region, including Edo, Delta, Rivers, Akwa Ibom and Cross Rivers State