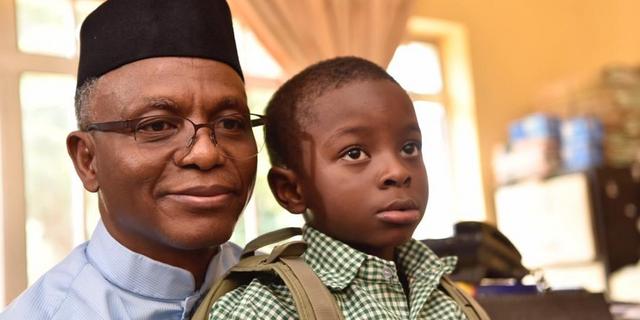 A teacher in the school says the governor’s son has not been coming to school since the COVID-19 lockdown was lifted last year.

El-Rufai who enrolled the boy into the school in September 2019, had said he made the move to fulfil the promise he made in 2017.

In December 2017, the governor had in a state broadcast promised to enroll his child in a public school when he turns six years.

But according to Daily Trust, the boy has stopped going to the school.

A teacher in the school disclosed to the newspaper that the governor’s son has not been coming to school since the COVID-19 lockdown was lifted last year.

The teacher said, “We used to see him when he was newly enrolled in the school, but we no longer saw him after the COVID-19 lockdown was lifted late last year and we don’t know why.”

Many Nigerians have described the governor’s enrolment of his son in a public school as a political and media stunt aimed at giving the impression that he is like the ordinary people of his state.

Explaining the reason why he withdrew the boy, El-Rufai in an interview with BBC pidgin said bandits are planning to kidnap the boy from the school.

He added that he withdrew the boy from the school to protect the lives of other pupils.

El-Rufai also said the decision to withdraw his son, Abubakar Al-Sadiq and daughter, Nasrine was based on the advice of security agents.

The governor who spoke in Pidgin English said, “My son dey registered for di school and even my daughter because im sister also clock six years and we register her for di school. But we get to temporarily withdraw dem for di security of di school because we get intercept from at least two groups wey dey plan to attack di school to kidnap my son.”

“I no tink say dem go succeed becos enough security go dey dia to prevent am, but oda children go dey placed in danger. We no get idea di kain weapons dem go carry come, I don take a stand against paying bandits and we don get intercept from at least three groups wey dey plan to go kidnap my son from Capital school to see if dem kidnap my son I go say I no go pay ransom.”

El-Rufai said his son is currently receiving home schooling, adding that the boy would go back to the school to write exams.