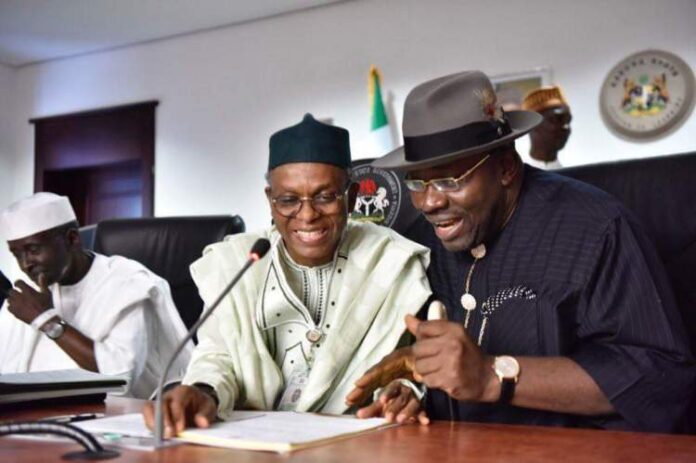 ….Governor Give reason for Action

Immediate past Governor of Bayelsa state and Senator representing Bayelsa West Senatorial District, Senator Seriake Dickson have said that the Kaduna State Governors actions for withdrawing his children from a public school was a right decision from a right step

Supporting Gov. Nasir El-Rufai’s actions, Senator Dickson Said criticizing the Governor of Kaduna State, Mallam Nasir El-Rufai for the withdrawal of his children from a public to private institution in Kaduna on account of kidnapping in the state was not the right step.

“My attention has been drawn to criticism of the Governor of Kaduna State, Mallam Nasir El-Rufai for the withdrawal of his children from a public to private institution in Kaduna on account of kidnapping in the state.”

“The Governor is right in his action. No one should expect a situation where public officers who either suffer threats or have been victims of kidnap of family members, to fold their hands and wait for kidnappers to strike and lament.”

“The decision by Governor El-Rufai to relocate his children from public school to a private one is a reasonable reaction of a father in the prevailing circumstance.”

“As someone who has been a victim of kidnapping myself; where in 2008, my late mother was kidnapped while I was a serving member in the House of Representatives, as well as in 2015, when my younger sister was kidnapped, while I was governor of Bayelsa State and people I know, equally suffered in hands of kidnappers, I appreciate the trauma and pains of Kidnap victims and their families and the fears and concerns of Governor El-Rufai as a father and Governor.”

“I also commend the Governor for his refusal to negotiate or pay ransome, for that is the right thing to do. This was also my position even when my family members as stated above were kidnapped, because every ransom paid to kidnappers and bandits funds the next criminal activity and legitimizes crime and criminality.”

“We must unite for the security and stability of our nation.”

MEANWHILE, Governor El-Rufai says he withdrew his children from the public school over security concerns

The Kaduna State Governor Nasir El-Rufai has withdrawn his children from a public school in the state and given a reason for his action.

The governor had enrolled his then six-year old son, Abubakar, at the Kaduna Capital School, a government-owned school, in September, 2019, claiming he took the step to promote confidence in public schools in the state.

NAIJA LIVE TV Obtained an Exclusive report on Friday from Daily Trust newspaper reported that Mr El-Rufai had secretly withdrawn the boy from the school, drawing angry comments from residents of the state.

Reacting in an interview with BBC pidgin, published on Friday, the governor said he withdrew the child and his sister, Nesrin, whom he had later also enrolled in the school, over security concerns.

He said the two did not return to the school since the COVID-19 enforced break and are currently homeschooling.

“My son and my daughter are registered in the school because his sister Nesrin became six and we had to register her,” Mr El-Rufai said.

“But we have had to temporarily withdraw them for the security of the school because we got intercepts from at least two groups that are planning to attack the school to kidnap my son.

“I don’t think they will succeed because there will be enough security there to prevent it but other children may be placed in danger.

“We have no idea what weapons they will come with. I have taken a stand against paying bandits and at least three groups of bandits have been intercepted planning to go to Kaduna Capital School and kidnap my son and ‘see if they catch my son, I go say I no go pay ransom?”

However, Mr El-Rufai said his son will take his examinations at the school.

He also said their withdrawal from the school is temporary, vowing to keep them in public school for as long as he remains governor.

Kidnapping of school children for ransom is rampant in Northern Nigeria, including Kaduna State.

The bandits later killed some of the students and released the others 43 days later, following payment of ransoms by their parents.

The governor has repeatedly said he will not pay ransom to bandits.