#NaijaLiveTv
Senator Dino Melaye, the Senator Representing Kogi West Senatorial District has stated that the Inspector General of Police Ibrahim Idris has no moral right and reasons not to pay the Police Officers who took to the street in form of Protest to demand their right for the non payment of their Salaries for the past Six Month. Dino describes the act by the Inspector General of Police as “WICKED” and an embarrassment of the Nigerian Police Force.

Borno Protest: Two Reasons Why Police Excuse On Salary Delay Is Not Tenable

It is no longer news that an unusual incident happened on Monday, July 2, 2018 in Maiduguri. Unusual because people we always see – Policemen – being deployed to prevent peaceful assembly and legitimate protests by Nigerians (or in rare cases assigned to provide security for privileged groups, who stage solidarity rallies) resorted to the same method to vent their anger over five months of unpaid salaries.

The Commissioner of Police in Borno State, Mr. Damian Chukwu, reportedly said the delay in the payment of the policemen’s allowances might not be unconnected with the late passage of the 2018 Budget.

This excuse, in my view, is not tenable for the following two reasons and others:

(1) The Executive arm of government is allowed to spend money to the tune of what was appropriated in the previous year under the same budget line for the first six months of a new budget year. Whereas the protesters claim was that they haven’t been paid for five months, which means since February 2018.

There must, therefore, be a different reason why these policemen where not paid other than the purported delay in passing the 2018 budget.

(2) Obviously, other agents of government, such as Ministers, Civil Servants and the Inspector-General of Police for instance, have been drawing their allowances within the same timeframe without the budget delay being an hinderance, which gives proof that the excuse offered is nothing but a cover-up for glaring mal-administration.

It is therefore an act of wickedness to use the excuse of delayed passage of the 2018 budget to deprive these valiant men sent to face death on behalf of all of us and for our collective security, of their legitimate entitlements. 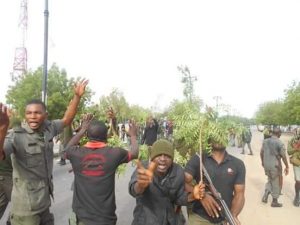 After all, it is on record, that the IGP when ordered by his Commander-in-Chief to relocate to Benue State in order to effectively deal with issues of insecurity in that state earlier this year, flagrantly refused to comply.

For the avoidance of doubt, the 2018 budget was delayed because some Ministers and Heads of Parastatals failed to come before relevant Committees of the National Assembly to defend their budget proposals in good time until Mr. President gave a directive to compel them to do.

May I, therefore, suggest that the Executive arm of government stop passing the buck and faces its duties of administering Nigeria properly.

No incident of this nature in Borno be allowed to repeat itself, as it is not only an embarrassment to the entire nation, but further put our floundering security at risk.