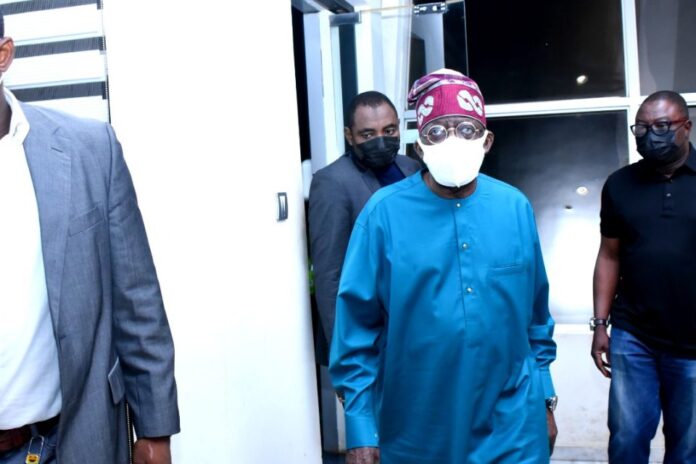 NAIJA LIVE TV had earlier reported his planned return to a “grand welcome” organised by his political associates.

However, due to his inability to stand the rigours of a physical rally, the ex-Lagos governor quietly entered into the country, shunning any fanfare.

NAIJA LIVE TV had reported that a grand welcome was being arranged at the Nigeria Police College in Ikeja, Lagos for the politician.

However, top sources confirmed his ‘early’ return to SaharaReporters on Friday: “Tinubu has quietly returned tonight. He returned quietly but can’t stand the rigours of a physical rally.”

It was also learnt that among those at the Murtala Muhammed International Airport, Lagos to meet Tinubu was the state governor, Babajide Sanwo-Olu.

SaharaReporters further learnt that the APC chieftain did not get down from his aircraft.

“His passport was stamped from Quits Aviation but he departed from Evergreen hangar at the airport,” a source said.

Meanwhile, the APC in Lagos State had sent out a circular to its leaders across the state informing them that the Sunday welcome party being organised for Tinubu would not be held as earlier scheduled.

NAIJA LIVE TV learnt that the APC sent the circular, signed by Alhaji Tunde Balogun (APC State Chairman), and Alhaji Maroun Are (GAC Secretary) to the party leaders believably at the ward and local government levels, without giving a specific reason for the change of plan.

NAIJA LIVE TV, however, gathered that the cancellation was due to the exclusive report published by this medium, which forced them to abort it abruptly.

“They’ve cancelled the police college event meant to welcome Tinubu back to Nigeria. It was due to the exposé of the media report by NAIJA LIVE TV,” a top source revealed.

In the circular obtained by SaharaReporters on Friday, the APC leaders were told that a new arrangement for welcoming Tinubu would be announced later.

“Dear leader/GAC member, you are hereby informed of change in plans/arrival of our National Leader billed for Sunday. Due to unforeseen circumstances, the plans/arrival have been put on hold. A new plan/arrival will be unfolded soon. Sorry for any inconvenience this hold may have caused. Thank you,” the notice said.

SaharaReporters had reported that Tinubu confirmed that he went through a challenging health crisis, saying his “physiotherapy was gruesome.”

Tinubu said this while addressing members of the House of Representatives northern caucus who visited him in London last Friday.

The former governor, who had been in the United Kingdom for the last three months since undergoing knee surgery, told the gathering, “Because of God and people like you, I am well. It is just the physio (physiotherapy) that is gruesome.”

Since his departure, Tinubu’s London home has become a mecca of sorts as he has been visited by President Muhammadu Buhari, the Speaker of the House of Representatives, Femi Gbajabiamila; Governors Abdullahi Ganduje (Kano), Dapo Abiodun (Ogun), Babajide Sanwo-Olu (Lagos), Rotimi Akeredolu (Ondo), and Kayode Fayemi (Ekiti).

SaharaReporters had also reported that Fayemi confirmed that Tinubu had surgery recently and he (Fayemi) was in London to show solidarity with him.

The governor had said, “He (Akeredolu) and I were in London together to see our leader, Asiwaju Bola Ahmed Tinubu, but it had absolutely nothing to do with 2023 presidential plans whatsoever. That’s not the reason why we went there.

“Asiwaju had just surgery; it is simply proper etiquette or behaviour both in the part of the country where I come from but also generally that when a friend and elder is undergoing health challenges, it would be improper on your part not to show solidarity and support.”

President Muhammadu Buhari also made a surprise visit to Tinubu in London where he was seen leaning on a walking stick.

NAIJA LIVE TV had reported that Tinubu underwent knee surgery at the John Hopkins University Hospital in Maryland, US.

The APC chieftain, it was learnt, left the US for the United Kingdom on crutches, a few days after the surgery.

Sources close to Tinubu told SaharaReporters that he wanted the surgery in Paris, France but changed his plan after rumours of his death spread in Nigeria.

“Tinubu had his second surgery at John Hopkins University in Maryland recently. He was accompanied by a popular Nigerian doctor in Chicago. He had wanted the surgery in Paris but when rumour was rife about his death, he hurriedly left for Nigeria and went to John Hopkins,” one of the sources had said.

“He left the US for the UK on crutches,” another source revealed.

NAIJA LIVE TV had on July 31 reported that Tinubu, who has had several medical trips this year alone, had surgery about two weeks earlier and could be billed for another one.

The APC National Leader has been off official and party functions in the country for a while, amidst talks that he is being positioned for the 2023 presidency to succeed the incumbent repressive regime of Buhari.

“He had a surgery last week,” an authoritative source had disclosed.

A few days after the story, photographs of Tinubu hosting Sanwo-Olu in London surfaced where the duo were seen together in a room.

Reports had it that the meeting was held to put an end to speculations surrounding the APC National Leader’s health status.

In January 2021, Tinubu was also reported to be ill and hospitalised in Paris, France.

Tinubu had earlier complained of exhaustion and travelled out to rest before the news of his collapse went viral.

He was flown to Paris for medical attention in the first week of January.

NAIJA LIVE TV had on June 15 reported that Tinubu was also in Paris, battling with some old-age ailment.

“Tinubu is in Paris, France for a medical checkup. His health is deteriorating. Old age and other stuff, but he still wants to be president. This could mean another medical tourism presidency for our country,” a top source had revealed at that time.

2023: We will take critical decisions when Tinubu returns – Akeredolu

2023: Amaechi opens up on ‘deal’ between Buhari, Tinubu

Tinubu, Advice no be curse, Yahaya Bello is right ﻿