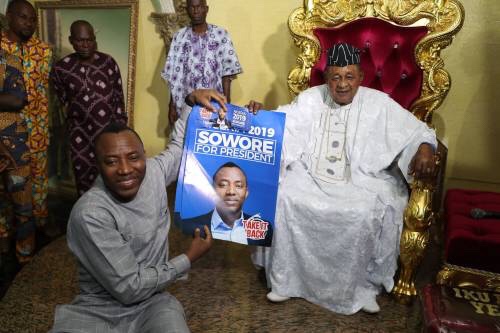 The Alaafin of Oyo, Oba Lamidi Olayiwola Adeyemi, has asked Nigerian youth to “wake up” and rise to the challenge of developing the country by participating in politics. ‎

The revered monarch, who spoke during a courtesy call to his palace by presidential hopeful Omoyele Sowore, said men of ideas now rule the world through well-crafted policies.

Noting that Nigeria’s first leaders after independence were young men of ideas, Oba Adeyemo argued that young Nigerians of today can also bring positive changes to the country if they are elected into leadership positions.

He identified guidance, inspiration, motivation, trustworthiness and role modeling as essential cardinals, which young people aspiring to the position of leadership must display if they want to be accepted. He also noted that youth will always need the support of the elders in the society to be successful.

“The Nigerian youth must wake up and come to participate in the political development of Nigeria,” he said.

“And for this country or state to develop there must be men of ideas that will sit down and define the appropriate modalities for the people and they should be rule. These men should be able to have programme of actions, and must have a philosophy of life that would help create your principle and also have a policy and a programme.

“So, you must be able to guide the people in the right direction and inspire them to also believe in your programme.”

The Alaafin also advisedyouth interested in taking up leadership roles not to engage in hooliganism but show that they are patriotic enough to lead the country.

Earlier, Sowore, who was received at the Alaafin palace with joy, said he decided to pay a visit to seek royal blessing from the monarch and the elders.

The pro-democracy activist noted Nigeria needs a “brave youngman” that would rescue the system from the hands of the corrupt leaders.

He disclosed that the younger men and women in the country decided to collectively say “enough is enough” of bad leadership in the country.

Sowore, who is also the publisher of Sahara Reporters, saluted Oba Adeyemi for always speaking truth to power starting from when he was young. ‘

“We have come to seek your prayers and blessing as we are climbing that sit to the top,” Sowore said.

“We want to take back our country from the hands of the bad leaders because we feel that they had their time up. The young persons are tired and are saying enough is enough of these old set of people who have taken us aback.

“Kabiyesi, nothing stops us as a country from having a free healthcare and free education like what is obtainable in some foreign countries. So, We are visiting the palace to show that we don’t hate the old people but we want them to understand that it has reached a stage where the country can be move from the bottom to the top.”

Incase You Don’t Know!!! The Oba Of Benin & Alaafin Of Oyo Were Once Dethroned In History

Alaafin Of Oyo Casts His Vote At Afiin Polling Unit 1