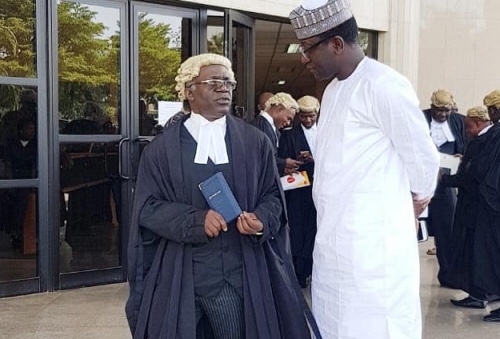 After about 20 months of battling for his suspension to be upturned, Abdulmumin Jibrin, the lawmaker representing Bebeji/Kiru Constituency of Kano State, finally tasted victory on Thursday when a Federal High Court sitting in Abuja granted his wishes.

In September 2016, Jibrin was suspended by the House of Representatives for 180 legislative days for accusing Yakubu Dogara, the Speaker of the House, and other principal officers of attempting to pad N30 billion projects into the budget.

However, on Thursday, Justice John Tsoho ruled that the House lacked the powers to suspend a member beyond 14 days.

“The suspension was an interruption of his earning, which will be automatically restored especially when it has been decided that the action was a nullity by virtue of granting prayers 1 and 3 of the originating summons,” Tsoho said, adding that “when an action is declared nullity it is deemed that it never happened”,

How much, therefore, will be paid back to Jibrin?

According to Economic Confidential — relying on the “legitimate” remuneration of federal legislators in compliance to the statutory approval of the Revenue Mobilisation, Allocation and Fiscal Commission (RMAFC) — the official monthly salary and allowances of a Chairman of a House of representative Committee is N802,356.72.

Before his suspension, Jibrin was the Chairman of lower chamber’s Appropriations Committee. If his official salary and allowances came to N802,356.72, then we would have a total of N14,442,420.95 when multiplied by the 18 months when his pay was interrupted before his recall in March 2018.

It is important to say the cumulative pay of Nigerian lawmakers has always been a subject of conjecture. As the lawmakers have stubbornly rejected public pressure to make them disclose their earnings, all we have left is figures that are as close as possible to mark