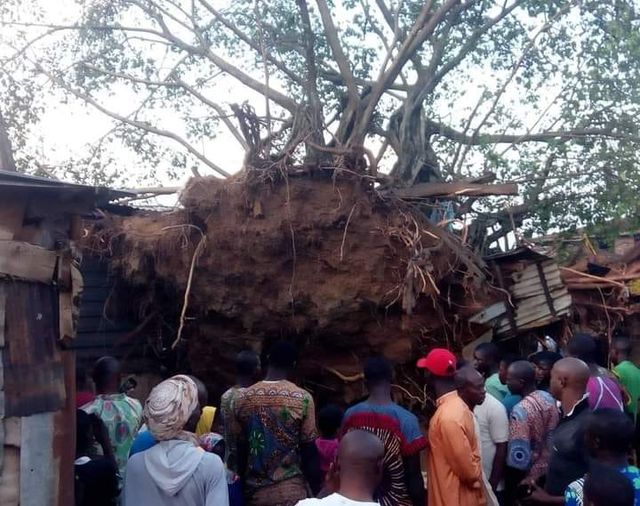 The Alaafin of Oyo, Oba Lamidi Adeyemi, has been troubled to visit the scene where a tree had fallen and rose again in Oyo town.

According to reports, the tree which is popularly called Igi Odan trapped at least four people on Monday night.

However, while residents were still mourning their beloved ones, the tree reportedly rose up before sunset the following morning.

Vanguard learnt that the tree has been at the location for over 100 years now. It came as a shock to residents to have seen the fallen tree whose branches had been already been hewn mysteriously back up on Tuesday.

Sources had told newsmen that the Odan tree was uprooted by the wind during the downpour on Monday night. They were, however, left in shock seeing that the fallen tree is now back standing firmly rooted to the ground where it was uprooted from a day earlier.

In photos and videos which were circulated online, the root of the tree was seen uprooted from the ground and the trunk was lying on the ground.

The branches were later cut off but the second series of photos and videos show that the tree had been rooted back to the ground but there were no leaves on it and the branches which had been cut off did not join to the trunk.

The development prompted the Alaafin of Oyo to visit the scene and commiserate with the families of the people killed by the tree earlier.

The monarch’s media aide, Bode Durojaye, when contacted on the phone said Oba Adeyemi had visited the scene to commiserate with the bereaved families and to see the mystery.

He said, “He went there. The fallen tree rose back again mysteriously. Kabiyesi commiserated with the people there over the sad incident.”

On his account when interrogated, the Chairman of the Sabo Market where the incident happened, Akeebu Alarape, said four different loggers invited to cut the tree did not succeed until a fifth logger was able to cut parts of it before the rescue operation could begin.

The Head of Operations of the Western Nigeria Security Network, aka Amotekun Corps, in the Atiba area, Akeem Ojo, said the tree fell on the victims who were mostly traders at around 6 pm.

“A female student of the Federal College of Education (Special), Oyo; a woman with a baby strapped to her back and a boy she was holding, were pulled out from under the tree.

“One person was seriously injured and taken to a private hospital in the area, while motorcycle and minibus parks under the tree were damaged,” Ojo added.