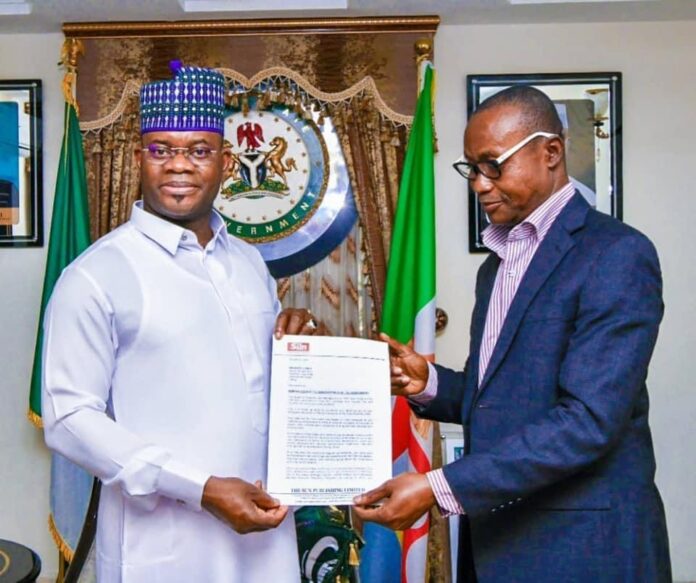 In a letter which conveyed the governor’s nomination signed by the Managing Director/Editor-in-chief, The Sun Publishing Limited, Onuoha Ukeh stated that Governor Bello’s achievements in the areas of peace, unity, infrastructure, education and agricultural development among others were outstanding.

Mr Onuoha noted that in the state’s history the governor’s name would be remembered for transforming the state into a modern destination of infrastructural development, youth and women empowerment, security enhancement, healthcare and other areas of development

He added that at such a time when the country was being plagued by insecurity, the governor has done so much at ensuring that the state was rid of security breaches and inter-tribal squabbles hence the state is relatively peaceful as residents go about their businesses without hindrances

Part of the letter reads “when you came to office in 2015 you inherited security challenges. Kogi state at that time was notorious as the den of crimes and criminalities. Due to the state’s strategic location, armed robbers and kidnappers attacked travellers frequently. However, on coming to office, you declared a full-blown war on armed robbers, criminals and kidnappers operating in the state

While other governors were going to the presidential villa begging for help to solve their security challenges, you took it upon yourself as the Chief Security Officer of the state to safeguard your people from men of the underworld. You provided the necessary types of equipment for security agencies”

While listing the numerous achievements in infrastructure and policy of the governor, he noted that despite the meagre resources Kogi has been turned into a construction site with several ongoing constructions, renovations and reconstructions

He noted that aside from many of these achievements, the Governor of the year award was given to the individual who has made a tremendous impact in governance which he affirmed the governor truly represented

It was stated in the letter that the presentation of the award will hold at the prestigious ‘The Sun award ceremony’ scheduled for Lagos in October.

While receiving the letter of nomination, Governor Bello thanked the organisers for finding him worthy of such an award. He said for a frontline newspaper like The Sun to have done their findings of his leadership in the state and to have nominated him as ‘The Sun Governor of the Year’ means additional push on him to do more for the people of Kogi State.