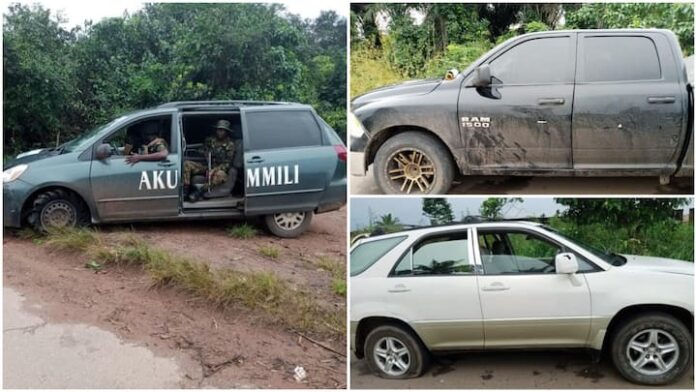 Some “Biafran National Guard gunmen” attacked the location of the troops conducting Exercise GOLDEN DAWN in Abia on Thursday, October 28 The gunmen were, however, met with the superior firepower of the troops who neutralised one of them.

A statement by the Nigerian Army indicates that other members of the guard who fled were also caught in Ebonyi while vehicles and Ohafia LGA, Abia state – Troops conducting Exercise GOLDEN DAWN have neutralised one of the “Biafran National Guard gunmen” who attacked them at Amaekpu, Ohafia local government area of Abia state on Thursday, October 28.

This is contained in a statement by the spokesman for the Nigerian Army, Onyema Nwachukwu.

Nwachukwu said the assailants who were heavily armed and conveyed in several vehicles opened fire on the troops’ location.

He added that they were, however, were met with stiff resistance by the troops which led to the killing of one of them while others abandoned their vehicles and fled with gunshot wounds.

The Army spokesman added that the troops also recovered a pump-action gun, among others.

He said the fleeing gunmen were also intercepted at Eda by troops of the Forward Operating Base Ohaozara in Ebonyi state., Daily Nigerian also reported.

According to him, the troops recovered additional three vehicles and apprehended one of the gunmen.

Meanwhile, at least five members of the proscribed Indigenous People of Biafra (IPOB) lost their lives when they recently engaged in a gun duel with soldiers in Abia state.

Security sources confirmed that the outlawed group stormed Arochukwu local government area to the enforce “sit-at-home” order it declared. It was gathered that IPOB militants exchanged gunfire with soldiers on arriving at the First Bank axis of the town creating tension around the palace of Eze Aro of Abia state.

A security source said five members of the group bowed to the superior firepower of the troops as residents scuttled into nearby bushes upon hearing gunshots.