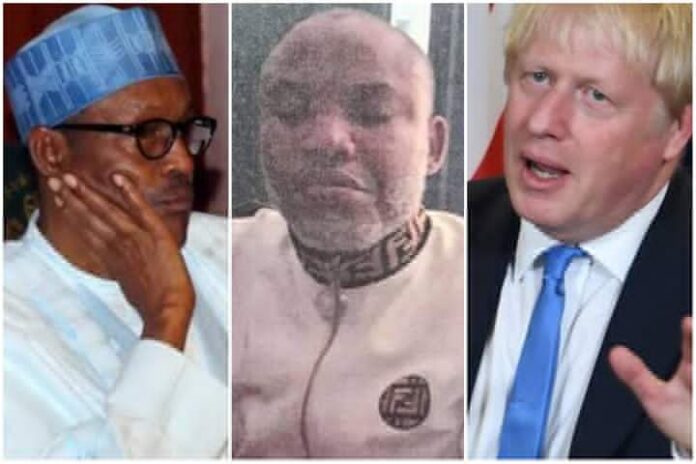 The Muhammadu Buhari-led administration would have to brace themselves for more legal fireworks following the arrest and extradition of the leader of the Indigenous People of Biafra (IPOB), Nnamdi Kanu.

Reports have emerged that the British High Commission and a law firm in London, Bindmans, have sought the consent of Nnamdi Kanu to take up his case.

According to the IPOB leader’s lawyer, Aloy Ejimakor, he delivered two forms to Kanu on Wednesday during a visit to the office of the Department of State Services (DSS), where he is being detained.

Ejimakor told Newsmen that the development would open up a new chapter in the trial of Kanu, adding that the Nigerian government would be served with summons to bring him to the United Kingdom, where another case would be heard over the manner of his rendition to Nigeria.

He said, “I went to visit him on Wednesday and went with two forms. One was the consular consent form that the British High Commission required that he signs to consent to consular assistance. There was also a form from his counsel in the UK. The firm is known as Bindmans, one of the largest law firms in the UK.

“The forms will open a whole new chapter of legality, including the filing of a Writ of Mandamus, against the Nigerian government in a UK court to compel it to produce Kanu, because his detention is illegal under the British law. It was an extraordinary rendition, which is an international crime by which a state kidnaps a suspect or a fugitive without the due process of law.

“They will be filing all these processes in the UK and there is a prospect of a UK court assuming universal jurisdiction or extra-territorial jurisdiction and reaching into Kenya so that they can arrest every Kenyan official, either authorised or not, and every Nigerian official involved in this case.”

According to the lawyer of the pro-Biafra activist, the DSS collected the forms, saying they must first go through the vetting of its legal unit.

Ejimakor stated that he had yet to be contacted by the DSS despite being told that he would collect them on Thursday.