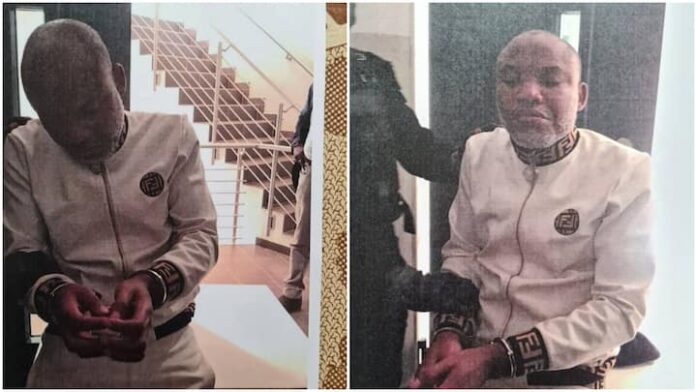 The leader of the proscribed Indigenous People of Biafra (IPOB), Nnamdi Kanu, may face fresh charges as his trial resumes on Thursday, October 21 This is as emerging reports indicate that the federal government has filed an amended seven-count charge against him Meanwhile, Senator Ifeanyi Ubah has asked a court in Abuja to grant him permission to see Kanu who is currently in the custody of the DSS.

The federal government has reportedly filed an amended seven-count charge against the leader of the proscribed Indigenous People of Biafra (IPOB), Nnamdi Kanu, before a Federal High Court in Abuja.

According to Daily Trust, the fresh charges border on treasonable felony and terrorism following the pending charges he was facing since 2016.

READ ALSO:IPOB reveals those who killed Dora Akunyili’s husband, Chike
The newspaper noted that the court has also issued a hearing notice in the case which is billed to commence on Thursday, October 21.

The notice titled Federal Republic of Nigeria Versus Nnamdi Kanu was served on Kanu’s lawyer, Ifeanyi Ejiofor, and that of the prosecution, Shuaibu Labaran.

The notice indicates that the court presided by Justice Binta Nyako made fresh directives on the conduct of the proceedings throughout the case.

The Punch reported that one of Kanu’s lawyers, Maxwell Opara, also spoke on the filed amended charges. Opara reportedly stated this on the premises of the Federal High Court in Abuja when he accompanied Senator Ifeanyi Ubah to file a motion on notice seeking an order granting him leave to visit Kanu in the custody of the Department of State Services (DSS). Details of the amended charges are, however, yet to be released.

Meanwhile, NAIJALIVETV.com had earlier reported that Senator Ubah, who is also the vice-chairman of the Senate committee on petroleum, upstream, recently called for Kanu’s release. The senator stated that Kanu’s arrest has triggered insecurity in the southeast, noting that the politicians have taken advantage of the Kanu situation to cause mayhem in the region. He made the comment during his engagements with Anambra businessmen at the Alaba International Market in Lagos.