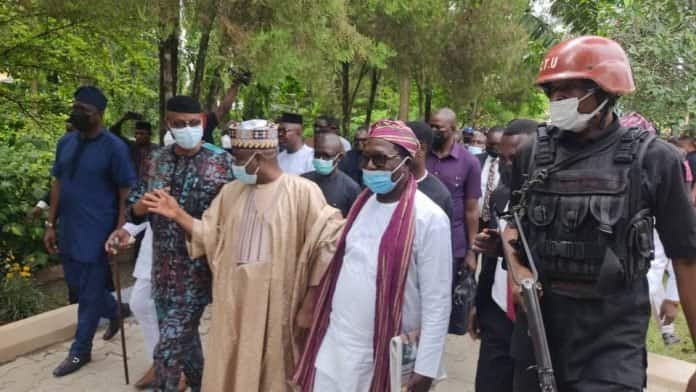 The entire working structure of the Zenith Labour Party (ZLP) in Ondo has collapsed into the PDP This happened after excutive members of the like the ZLP’s chairman, Joseph Akinlaja, and leader, Olusegun Mimiko, join the oppostion party on Thursday, October 28 Other stakeholders followed suit and unanimously declared their decision to become members of the PDP.

Executive members and stakeholders of the Zenith Labour Party (ZLP) on Thursday, Octtober 28, agreed to join the Peoples Democratic Party in Ondo state. The Nation reports that the decision to join the PDP was made during a high-profile meeting at the Ondo town residence of ZLP’s national leader, Olusegun Mimiko.

Mimiko, a former governor of the state, explained that the PDP’s invitation to his party was in the bid to help Nigeria out from imminent destruction characterised by growing insecurity.

He said this after his meeting with prominent PDP governors led by Seyi Makinde of Oyo state.

Mimiko said PDP have demonstrated readiness tointegrate all willing defectors from the ZLP and grant them full membership rights.

After deliberations, the chairman of Ondo ZLP, Hon Joseph Akinlaja, made a call for a motion requesting for members of the ZLP in Ondo to join the PDP which was followed by a yes vote by all present at the meeting.

Recall that four governors on the platform of the PDP were in Ondo to woo Mimiko back to the lead opposition party. The PDP governors Seyi Makinde (Oyo state), Nyesom Wike Rivers (state), Okezie Ikpeazu (Abia state) and Aminu Tambuwal (Sokoto state).

Naijalivetv.com gathered that a large number of members of the ZLP, were at Mimiko’s residence in Ondo town to welcome the PDP governors. They were meeting behind closed doors with Mimiko at the time of filing this report. It was gathered that the Governors are to formalise talks with Mimiko on his return to the party.

Mimiko was expected to address journalists and formally announce whether or not he will be joining the PDP along with his associates and supporters.