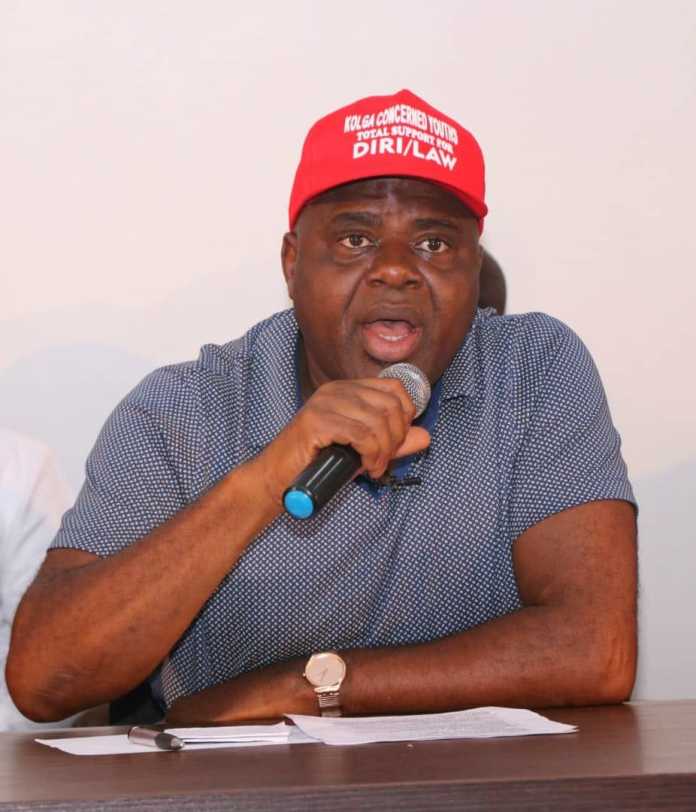 The candidate of the People’s Democratic Party (PDP, Senator Douye Diri has rejected calls to congratulate Chief David Lyon of the All Progressive Congress (APC)and the declared winner of the Saturday Governorship poll, declaring he was the true winner of the election.

Senator Douye Diri, in a press conference yesterday in Yenagoa, alleged that the INEC and the Nigerian Army connived with the APC to rob him and the PDP of their victory.

According to him, the results collated from the PDP situation room indicated that the PDP defeated the APC in all the local government areas of the state.

Senator Diri also claimed that based on the Court Judgement delivered against the APC on the 14th of November,2019, the party was not on the ballot paper and any vote for it would be null and void.

He maintained that by legal provisions, APC should not have participated in the election and wondered why INEC would not produce the Court order that directed it to include APC on the ballot.

“We believe that the subsisting court judgment that disqualify APC as of the time the election was conducted. The request by PDP agent at the state collation center, Dr. Don Osusu that INEC should produce the order which made APC presence during collation legitimate was ignored. We urgently call on INEC to declare me winner”

“It is only shameful and laughable that INEC would manufacture figures. For us the rule of law is under threat in this democracy; anarchy is looming in this democracy, democracy is being raped.  All the figures reeled out are a charade and a ruse”

Diri who listed several areas in the state where APC leaders and Nigerian Army intimidated, harassed and molested PDP leaders, regretted that INEC staff were also kidnapped and forced to accept fake results.

Meanwhile, the Former Minister of State for Agriculture and Rural Development, Senator Heineken Lokpobiri has thanked Bayelsa People for voting the All Progressive Congress (APC) in the just concluded Governorship polls.

According to Sen. Lokpobiri, the victory of the APC is a loud and clear message from Bayelsans that they are ready and willing to change their destiny towards prosperity and good governance.

He congratulated Bayelsans and urged them to believe in the party because the APC will move the state to the next level with a renewed and amicable partnership with the Federal government led by President Muhammadu Buhari in order to attain the desired visible and sustainable development in the State.

Sen. Lokpobiri, also congratulated President Muhammadu Buhari, the APC Governors, especially Governors of Kebbi and Jigawa States, and the National Leadership of the Party, for the victory of the party at the polls.

Nigeria is in a terrible state of underdevelopment –...