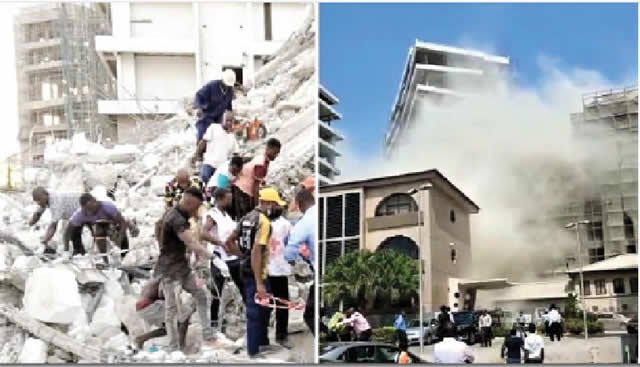 THE Lagos State Government again underscored it is paying lip service to building regulations and control when a 21-storey tower being developed by Fourscore Heights Ltd. crumbled like a pack of cards on Monday. As of Saturday, 42 people had been confirmed dead with rescue operations ongoing and survivors in hospitals in the state. This time, only a judge-led public inquiry into the disaster and speedy implementation of its report will curb the serial game of death and sorrow in Nigeria’s commercial capital.

From the reports so far, one fact stands out: the building construction breached regulations. The incident has caused many families untold misery and left sympathisers terribly heartbroken. Another thing is clear: the ugly sceptre of building collapse is habitual in the state without cogent, matching efforts to nip it in the bud.

Sadly, the Gerrard Road, Ikoyi, catastrophe was not the first in the state. But it appears no serious lessons were learnt from previous fatal cases. There was no evidence of criminal prosecutions of the contractors involved in the previous collapses, and the regulatory authorities that supervised them. In 2019, a three-storey building collapsed in the Ita Faaji area of the state after what experts termed “structural failure,” killing 20 people, and trapping many. It enacted a terrible scene because a school was located on the third storey and housed about 100 pupils. In 2014, a guesthouse located within the Synagogue Church of All Nations, Lagos, collapsed completely to the ground. About 116 lives, which included foreign nationals, mostly South Africans, were lost to the disaster. In 2016, a five-storey building belonging to Lekki Gardens gave way, killing 35 people in the state. A prosecution witness later told a Lagos High Court, Igbosere, during a trial of the owner of the firm that the building had no government approval.

Building collapse tragedies are so recurrent in the state that it is gradually becoming hard to keep track of them. Before the latest incident, last month, one person died, and three others were trapped when a building collapsed at night in the Ikorodu area of the state. Past incidents have been traced to use of substandard materials, quackery, faulty designs, foundation failures, overloads, and corruption.

It goes without saying that the loss of life and limb recorded in the newest disaster were caused by greed, institutional rot, and administrative irresponsibility. This underscores why the Babajide Sanwo-Olu-led state administration must match words with actions and severely sanction those culpable if only to send a warning that there is a new sheriff in town.

The impunity has reached an alarming level and the government must enthrone the culture of ‘Never Again’ in the state to engender sweeping reforms in the sector. This is the global best practice. In 2013, Bangladesh reinforced the concept of Never Again when an eight-storey garment factory in Dhaka collapsed leaving only the ground floor. The death toll was 1,134 at the end of rescue operations. But the country promptly moved to prosecute those responsible for the avoidable national disaster.

Currently, Lagos, like many of the other 35 states here, lacks the Never Again culture in the housing sector. This explains why the tragedies have turned a cycle without the political will to halt them. As the government has maintained that approval was given for only a 15-storey building backed by revelation that inferior building materials were used, it is expected that a team of experts inaugurated to probe the incident would expose grey areas after its 30-day ultimatum and make sweeping recommendations to ensure sanity in the industry.

In many states, quacks and greedy developers parading as professional builders alter original permits, use substandard materials, and engage in illegal conversions. There are government agencies saddled with the responsibility of ensuring adherence to building regulations, but they prefer to shamelessly wear incompetence as a badge of honour. Corruption and compromise run deep too. In 2017, a report by the Federal Ministry of Power, Works and Housing indicated that 54 buildings collapsed across the country in four years. But rather than decline, the cases increase. In 2020, an advocacy group of built environment professionals, Building Collapse Prevention Guild, noted that 43 cases of collapsed buildings occurred in 2019, with Lagos recording the highest with 17 cases, indicating 39.53 per cent of the total cases. While there appears to be a lull in the tragedies in other states, they irritatingly persist in Lagos. The Lagos State Building Control Agency and the Ministry of Physical Planning and Urban Development should be up and doing in reversing the growing trend of collapsing buildings.

It is damning that no one gets punished for costly gambles with human lives. Like past incidents, this new case may also be swept under the carpet after the initial executive bravado. It is a culture, a trademark, and a way of life in the state. Incompetent individuals continually endanger lives of Lagosians while the government engages in hue and cry without significant outcomes. This growing governmental rashness must stop forthwith. The Nigerian Institute of Building, town planning authorities, the Nigerian Institution of Structural Engineers and allied agencies should collaborate to rid the sector of quacks and guarantee hard-hitting sanctions for erring members.

The Lagos State government is culpable in the latest calamity. The governor appeared to be aware of this after visiting the disaster site and admitted that it qualified as a national disaster. He said, “This is an event that one can say that indeed mistakes were made from all angles, and this is an event that truly really shouldn’t be happening in a modern-day city like Lagos State.” Sanctions should follow.

Interestingly, the Minister of Works and Housing, Fashola, reiterated that there were adequate laws to check the menace of building collapse and prosecute offenders which he said the actors were not implementing. This is a challenge to Lagos State and other states to individually re-examine prescribed standards of the 2006 National Building Code to enforce regulations and ensure quality and safety in the nation’s built industry.