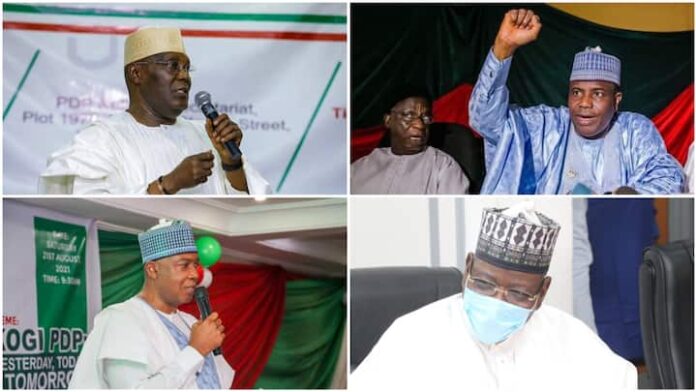 On Thursday, October 14, Senator Iyorchia Ayu, emerged as the consensus chairmanship candidate of the Peoples Democratic Party (PDP). Ayu is from Benue state in the north-central.

With the northern region on the verge of producing the PDP’s national chairman, political analysts speculate that the party may zone its presidential ticket to the south.

However, emerging reports by the Nation and The Punch newspapers have indicated that some prominent members of the PDP want the presidential ticket thrown open, a situation that may allow the north to still produce the party’s presidential candidate, despite getting the chairmanship slot.

Below are the party chieftains who allegedly want the party’s ticket thrown open to all zones:

PDP panel discourages zoning Earlier, NaijaliveTv reported that a panel of the PDP said merit, not zoning, should determine the party’s presidential candidate in the general elections in 2023.

The panel which was chaired by Governor Mohammed of Bauchi state was constituted to review the performance of the party in the 2019 elections. Submitting the report of his committee to the PDP National Working Committee (NWC) on Wednesday, March 17, Governor Mohammed said every part of the country should be given the opportunity to choose the best candidate.

The Igbo apex group called on the PDP to withdraw the report and zone its presidential ticket to the southeast ahead of the 2023 general elections. Ohanaeze, in a statement released on Thursday, March 18, described the committee’s report as most despicable, un-reflective and unconscionable.

The Igbo organisation stated that the report was capable of impugning the unity of the country since it has been earlier agreed that the presidency would return to the south after the tenure of President Muhammadu Buhari.