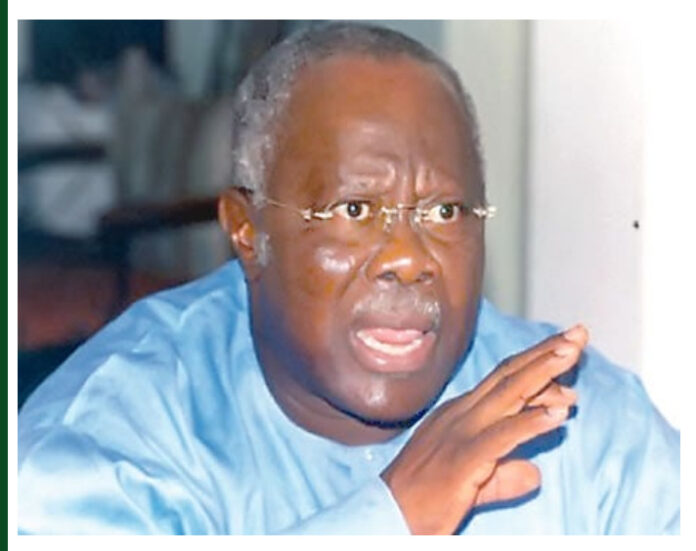 Former Deputy National Chairman of the Peoples Democratic Party (PDP), Chief Olabode George, on Sunday, reacted sharply to the zoning which gave the North the chairmanship of the party and left the presidency open, describing it as incongruous, unfair, unwholesome and a recipe for disaster. This was just as George noted that the new arrangement was a threat to the unwritten doctrine within PDP, insisting that come 2023, the presidential candidate of the party must come from the South for equity and fairness since the national chairmanship of PDP had been zoned to the North.

George, who is also the Atona Oodua, gave this position in a release titled: “Zoning is about equity and fairness,” citing the laid down rules and regulations of the party which upheld that position concerning sharing of six key offices in the country, since 1999.

NaijaliveTv reports that the party a few days ago at one of its meetings threw open the presidency slot, saying all the six zones of the country can now contest for the seat, come 2023.

“The zoning arrangement which gave the North the chairmanship of our party and leaves the presidency open is incongruous, unwholesome and a recipe for disaster.

“Once the chairmanship is now in the North, the presidency must come to the South. There must not be any ambiguity at all. This should be crystal clear. Hanging the presidency in the air like a hovering craft without a landing zone is dangerous, unfair and wrong,” George said.

George, while insisting on the South producing the next president on PDP platform, said the six key positions in the country were zoned by the party because of the necessity of national belonging and accommodation, noting that it was to ensure that every section of the country “have a sense of equitable participation in our national life.”

He added that this had been the enduring pivot of the country’s democratic experience since 1999.

“There is an old, enlightening principle laid down by the founding fathers of our party since 1999 that six key positions must always be zoned to the six geo-political constituents of our nation to ensure equity and orderly balance of power.

“The six key positions are the President, Vice President, National Chairman, Senate President, Speaker of the House of Representatives and the Secretary to the Government of the Federation (SGF).

“Naturally, this means that if the Presidency goes to the North, the Chairman of the party goes to the South and vice versa. All these positions are zoned because of the necessity of national belonging and accommodation. Every section of this nation must have a sense of equitable participation in our national life. This has been the enduring pivot of our democratic experience since 1999,” the PDP chieftain said.

Speaking further, George, lamented that it was rather inexplicable that the stakeholders in PDP cannot be firm and decisive about an issue that would inevitably affect the future of the party and the nation itself, “in a nation reeling with divisive politics, marred with discord and ethnic distrust.”

George, therefore, called on all PDP stakeholders to come together and reaffirm what he called the great vision of the party’s founding fathers, saying this was not the time for uncertainties and half measures, even as he warned that PDP can reclaim the centre in 2023 only if every section of this great nation was treated as co-equal and a significant partner in the national voyage.

“This is not the time for uncertainties and half measures. Our vision must be clear. Our goal must be certain. Our resolve must be sincere,” he said.

“There is no other way. Zoning of all the six key offices will continue to ensure a strong and healthy democratic nation anchored on the fairness doctrine.

“Let us do what is right. Let us do what is proper. Let us revisit the precedents that have sustained us and put us in good stead among Nigeria people. “This is my advice to all the ranks and files of the party. And this is the only way we can appeal to the generality of our people and win the presidency in 2023,” he added.