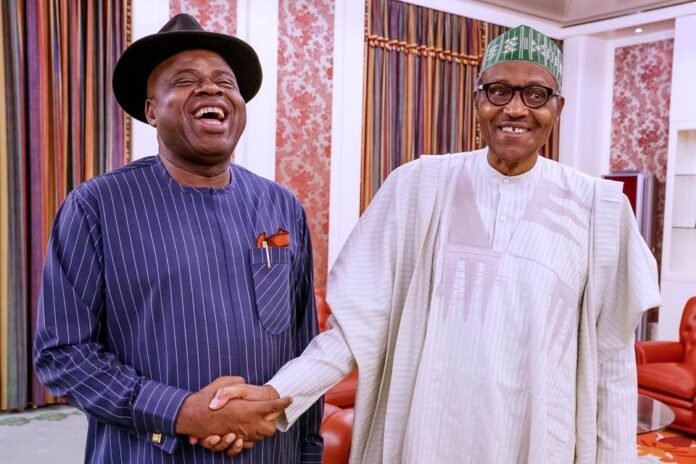 The Governor of Bayelsa State, Senator Douye Diri, has appealed to the Federal Government to implement the judgement of the Federal High Court Abuja on the refund of $951 million to the state.

The Court gave the judgement on Monday, June 21, saying the money was the shortfall in oil derivation revenue due to the state.

Making his first public reaction after the judgement, inside the Executive Council Chambers of the Government House, Yenagoa, Diri said the money was due to the state based on the Constitution and the 13% derivation principle.

In a statement signed by his Spokesman, Mr Daniel Alabrah, the governor said his administration was open to dialogue with the Federal Government to amicably resolve the matter, noting that constant litigations would not engender cordial relationship between states and the centre.

His words: “Let me use this opportunity to appeal to the Federal Government to please implement the consent judgement that has been delivered.
We are prepared for dialogue to ensure that we have a smooth relationship with the Federal Government. We believe that governments are one and the same and we have the task of protecting and bringing peace to our country. Litigations would not bind us together as a people.

“What is right is right. Clearly, these are monies and finances that are due to Bayelsa State by the Constitution and the 13% derivation principle”.

In another development, Senator Diri urged people of the state to set aside their differences and live in peace to engender development.

He gave the admonition when he received a report of the committee set up by the state government on the Peremabiri community crisis.

Diri, who acknowledged that disagreements were a part of co-existence, noted that such should be peacefully settled in the spirit of brotherhood.

While stating that meaningful development would not take place in the absence of peace, he called for an end to conflicts that lead to destruction of lives and property in the state.

He decried constant conflicts experienced in some communities in the state, saying that through his administration’s intervention, most of the brewing crises were averted.

The governor described Peremabiri as a richly endowed community in both human and natural resources but regretted that such gifts had been negatively utilised as it had been embroiled in crises for about four decades.

“Today, we are handling issues about Peremabiri. But there are pockets of conflicting situations dotted across the state. As you are aware, this administration has been trying its best in handling most of these crises by nipping them in the bud.

“We cannot afford fratricidal wars, inter and intra-communal conflicts that have dotted all the spaces of Southern Ijaw and the state. It is time for us to go back to those good old days that our forebears lived in peace”.

While thanking the committee led by the member representing Bayelsa Central in the Senate, Senator Moses Cleopas, Diri assured that his government would take an unbiased look into the report with a view to implementing it.

The governor, who expressed optimism that his administration would bring a lasting peace to the community, called on all to support its initiative to end the conflicts in the area.

Earlier, Senator Cleopas stated that findings of the committee revealed the absence of a generally accepted constitution, frequent change of leadership, divide and rule tactics by Shell Petroleum Development Company were some of the causes of conflict in the community.

To forestall future conflicts, the committee recommended the enactment of a new constitution, signing of a peace accord by major actors, signing of a new Global Memorandum of Understanding by SPDC, among others.

The peace and security committee on Peremabiri was set up in January 2021 following attacks on the community by unknown gunmen.