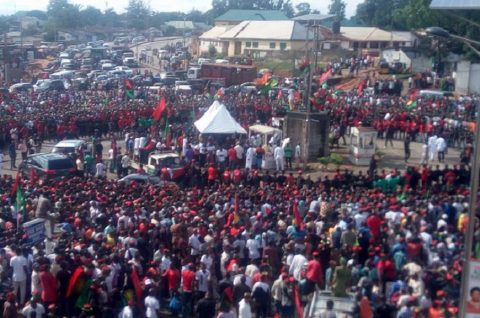 #NaijaLiveTv
It has been brought to the attention of the worldwide family of the Indigenous People of Biafra (IPOB) that Nigerian Police, in collaboration with the murderous DSS, Aso Rock cabal, with active connivance of some Efulefus in Ohaneze Ndigbo are hell-bent on using the law enforcement instruments of state to give IPOB a bad name. But as always they have failed. Those behind this latest scheme to impugn the unimpeachable integrity of IPOB are the same people that have for four years tried unsuccessfully to label IPOB a terrorist group.

We find it ironic that at a time when murder and mayhem perpetrated by Fulani terrorists is the order of the day across the land, law enforcement agencies in Nigeria, disproportionately staffed and led by core northern Fulani officers, will brazenly seek to divert public attention away from their genocidal ethnic cleansing in the Middle Belt and point same towards IPOB. Only those blessed with irredeemable ignorance and natural stupidity will give this purported arrest of IPOB family members, in connection with an alleged bomb explosion at Nwodo’s house, a second thought. Nigerian Police is well known for their uncivilised and crude approach to investigations and will charge a goat with a crime if it will help the local DPO, Commissioner Of Police or governor advance his public relations or as in this case help tarnish the squeaky clean image of IPOB.

Nigerian courts are littered with cases of IPOB family members charged with terrorism, treason, treasonable felony, murder, attempted murder, arson and more outlandish charges not catered for in the Nigerian criminal code but at the end of every legal process, the same police and DSS will end up running away from their law courts. Despite the litany of much publicised arrests, with thousands illegally detained in police and prison custody across Nigeria, till date no single IPOB family member, we repeat- no single IPOB has ever been convicted of any crime and none will. By DNA we IPOB are God fearing, law abiding citizens under a sacred oath not to commit any crime against person or state because Biafra is the kingdom of heaven on earth.

We are used to these laughable periodic stunt charges and phoney arrests anytime the government is in public relations mess and seeking to divert public attention away from their crimes. How bizarre that peaceful IPOB family members are being arrested when Fulani terror herdsmen have government license to slaughter innocent populations at will. Why won’t all these seemingly efficient Fulani police commissioners in the east apply their investigative skills in apprehending and charging Fulani terrorist herdsmen butchering entire communities rather than buying themselves with peaceful IPOB.

Only those with with mental health issues will be taken in by this latest gimmick from the Fulani controlled Enugu State police command. With our referendum round the corner, we expect many more arrests and outlandish charges as a way of attempting to weaken our unbreakable resolve. But as always the Nigerian State will fail as they have always failed in the past.

IPOB is a phenomenon, the largest freedom fighting movement on earth bar none. Any day we pick up arms the world will know about it. We will never dirty our hands with bombs because we have more effective and proven methods of reducing our opponents to nothing without physically harming them.

Nigerian Police are in the unprofessional and crude habit of making periodic prejudicial public statements against IPOB in the hope of incriminating innocent people. This is not the first time and definitely won’t be the last. The two men arrested will be defended to the hilt even if they are not IPOB family members because to abandon them at the mercy of a brutal police force will only encourage more arrests of innocent people. During their trial, which we demand should commence immediately, the world will once again witness the accusers of IPOB be put to shame.

IPOB is the saviour of the downtrodden but yet the most persecuted mass movement anywhere in the world. Frivolous charges designed to titillate the senses of the ignorant, the bigoted north and their slaves in governors lodges in the east and Ohaneze Ndigbo compromised leadership, won’t hold any water in court. We have always defeated the Nigerian government in their own law courts and this case won’t prove to be an exception. As usual, IPOB will clear her name in a court of law while shame will remain the portion of the Efulefus.

Fulani terrorists with their cattle are the people involved in acts of terror not IPOB. This APC government has been accused of aiding and abetting terrorism by Gen. TY Danjuma and Amnesty International. That is where the police should focus their investigations. Ohaneze Ndigbo and Igbo governors should stop using Fulani controlled Nigerian Police, army and SSS to fight their battles for them. They should meet IPOB at a referendum because these silly stunts by the police, SSS and army will never deter us.