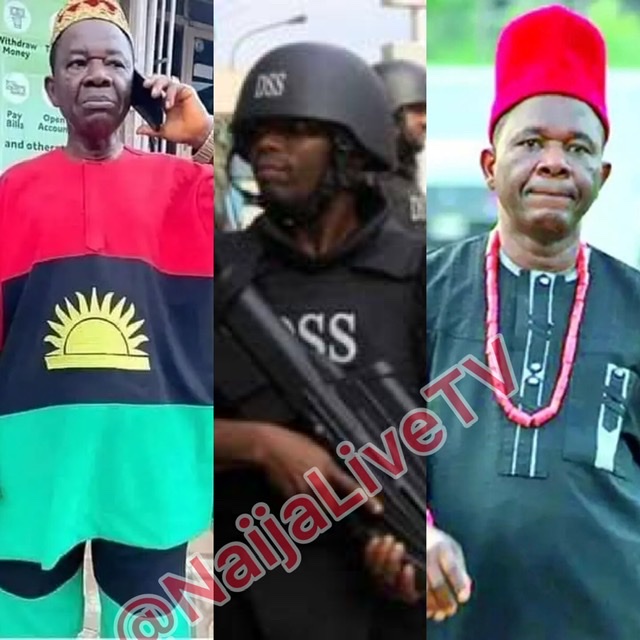 A Human Rights Activist, Bar. Ifeanyi Ejiofor has alleged that the Department of State Security Service (DSS) have abducted the Veteran Nollywood Star, Chief Chiwetala Agu hours after he was released from the Army Sector command in Enugu.

In a statement obtained by NAIJA LIVE TV, the Human-right lawyer is calling for the unconditional release of the Nollywood Star.

ARREST OF CHIEF CHIWETALU AGU BY LAWLESS NIGERIAN SOLDIERS, RELEASE, AND SUBSEQUENT RE-ARREST BY THE OPERATIVES OF THE DEPARTMENT OF STATE SECURITY SERVICE (DSS) AND HIS CONTINUED ILLEGAL DETENTION WITHOUT ACCESS TO HIS LAWYERS AND RELATIVES:

My social media platforms have been inundated with public condemnation and outrage that trailed the abduction of a first class Chief of Udi in Enugu State- Chief Chiwetalu Agu, on the 7th Day of October 2021, his release, and subsequent re-arrest by the operatives of the DSS.

I watched in frustration, the gory clips that vividly captured the unfortunate moment this Igbo respected elder was gravely abused by those who are young enough to be his Children.

I took time to embark on extensive findings with a view to unearth the real motive behind the presence of these marauders on our land after concluding our routine visit to my Client at the DSS facility on this fateful Day, because there is more to it than meet the eyes.

I was shocked to watch a respected elder and widely celebrated Nollywood Veteran Actor, who has creditably distinguished himself in the industry being dehumanized and treated like a common criminal.

If I may ask, what offence has Chiwetalu Agu committed to warrant being subjected to such humiliation, torture, inhumane treatment and degradation by those who knows little or nothing about our laws?

Can these untamed men, recklessly abusing their offices tell us why they are desecrating our elders and by extension the sacred land of our ancestors?

What have we done to deserve this inhuman treatment from those who should be detribalized in the discharge of their service/duties to the country? My heart bleeds!!!

It is worthy to note that the suspected motives behind the real mission of these untamed Soldiers who are presently occupying our land under the guise of “Operation Golden Dawn” is being uncovered, and will be ultimately uncovered in the coming days.

Hear it today, that this is another round of “Operation Python Dance” in disguise. There is no illusion about this.

Intelligence available to us is irresistibly alluding to the fact that some prominent persons from this side of the divide, ostensibly those not in the good books of the Establishment are on the radar of these invaders, awaiting to be whisked away at any slightest opportunity, during this coded operation and under the guise of providing security.

The intelligence also advice that I, in particular, should stay away from my fatherland for now, pending when the dust settles because they can do and undo. Alas! Here they will get it wrong because no man born of a woman will chase me away from my ancestral home despite the fact that I am heavily engaged now with more serious legal undertakings than ever before.

The soldiers largely made up of acclaimed repentant Bokoharam fighters conscripted by the Nigerian Army are currently laying siege on our land. They found the “Operation Golden Dawn” as an excellent opportunity to cause mayhem on our hitherto peaceful land, and consequently pave way for the killing spree to continue.

Hence, I am most candidly advising our dear brothers and sisters to thread with utmost caution during this trying period. Please do not take any opportunity for granted, as these untamed men are here on a special mission, but be rest assured that Chukwuokike Abiama – the Almighty God will incapacitate them on this evil mission. Iseee!!!

Please you must remain law abiding as you have always been, and do not be provoked by their murderous conducts. You must remain civil and continue to apply caution and restraint, because that is the only signal they are waiting for, but by restraining ourselves, the murderers will go back to where they came from in shame.

Even though he was released by the invading Soldiers, their barbaric act is totally condemnable and the Military High Command must immediately tender an unreserved apology to Chief Chiwetalu Agu for the gross violation of his Fundamental Human Rights.

Unfortunately, disturbing information reaching me few hours ago is that Chief Chiwetalu Agu has been re-arrested by the DSS. We will follow up on this and ensure that his Fundamental Human Rights is not further violated.

To this end, we hereby demand for the immediate and unconditional release of Chief Chiwetalu Agu, from the custody of the DSS.

TAKE NOTICE that we, the lawyers of Igbo extraction shall take appropriate steps permissible under our laws, to ensure that such occurrence is nipped in the bud. We are watching and taking inventory of grave infractions on the Fundamental Human Rights of our people currently being perpetrated by those whose clear mandate was to provide security and by extension peace in our region. But sadly, the reverse is the case here.

We are first humans and equal, and must be treated as such, as provided under the laws of our land.

Thank you all and may Chukwuokike Abiama continue to bless and keep us all, Iseeee!!!

“If my husband cheats on me, I will change...

Bayelsa to clamp down on illegal refinery operators from...

“Police did not arrest me with illegal firearms” –...

Panic as “fetish” substance found in court premises in...