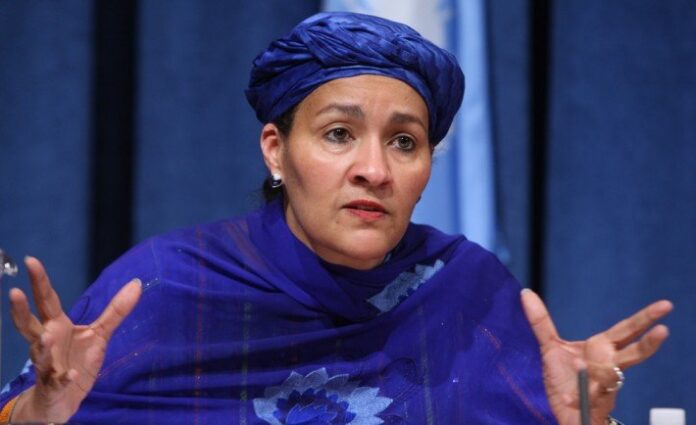 The Ijaw Youths Council (IYC) Worldwide has congratulated Amina Muhammed on her reappointment as the UN’s Deputy Secretary-General.

The council in a statement signed by its President, Deacon Peter Timothy Igbifa, described her reappointment as acknowledgement of Nigeria’s contributions to global economy.

Igbifa said with the reappointment, the country occupied a vantage position globally to address her environmental and other challenges.

The IYC boss particularly tasked Amina on the conservation of the Niger Delta wetland rated as the third largest in the world.

He said with the neglect of the Paris Agreement on preservation of wetland by the Federal Government, the natural endowment located in the Niger Delta had been recklessly abandoned.

Igbifa called on Amina to visit the Niger Delta to assess the damage done to the country’s wetland and use her vantage position to actualise the Paris agreement.

He said such visit would help Amina to gather facts on the devastation of the Niger Delta economy and enable her make case for the Niger Delta in the next UN General Assembly.

Igbifa said: “As a Council, we congratulate Amina Mohammed on her reappointment as the Deputy Secretary-General of the United Nation’s.

“Her reappointment is an eloquent testimony of global acknowledgement of Nigeria’s contributions to the global economy. We call on Amina to use her office to address the abandonment of the Niger Delta wetland conservation.

“Niger Delta wetland is the third largest in the world. Unfortunately, the Federal Government has recklessly neglected it despite being part of the Paris Agreement on wetland preservation.

“As a buffer zone and a protector against natural disasters, the wetland if completely destroyed will worsen the global climate change  and expose the country to unimaginable risks.

“We call on Amina to pay a scheduled visit to the Niger Delta region to assess the damage being done to the wetland and give that national support as the IYC makes case for the people of the region in the next UN General Assembly”.

HON. BELLO URGES FEDERAL GOVERNMENT TO TACKLE THE ISSUE OF ENVIRONMENTAL DEGRADATION, SAYS BRASS IS BEING WASHED OFF

Rivers aircraft abandoned by Rotimi Amaechi in Germany since...

Pastor Arrested For Allegedly Sleeping With Woman & Her...