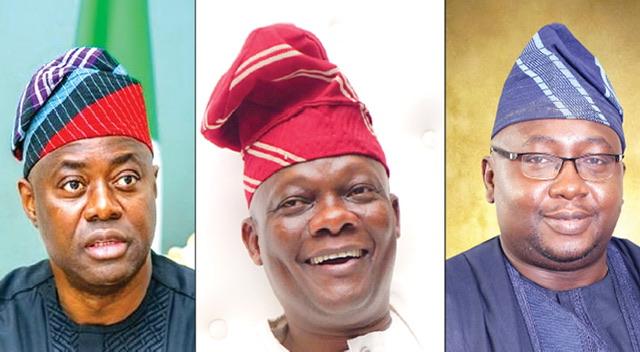 ADEMOLA ADEGBITE writes that the Oyo State Governor, Seyi Makinde, faces multiple challenges as he begins campaign for his re-election

On Thursday, the Oyo State Governor, Seyi Makinde, who was elected on the platform of the Peoples Democratic Party in 2019 began the campaign for his re-election.

Although the historic Mapo Hall, the venue of the rally was jam-packed, there are clear indications that Makinde’s road to second term would be rough.

First, it seems the governor and some PDP chieftains in the state are not on the same page with the candidate that they will  support in the February 25 presidential poll.

On Wednesday, a former Minister of the Federal Capital Territory (State), Jumoke Akinjide; an ex-Deputy Governor of the state, Hazeem Gbolarumi and another former Minister, Mines and Steel Development, Wole Oyelese, held a solidarity walk for the PDP presidential candidate, Atiku Abubakar, whom Makinde and other four aggrieved governors had withheld support for.

Makinde, Nyesom Wike of Rivers State, Abia State Governor, Okezie Ikpeazu, Benue State, Samuel Ortom and Enugu State, Ifeanyi Ugwuanyi have refused to campaign for Atiku because of the refusal of the latter to prevail on the PDP National Chairman, Iyorcha Ayu to step down for a southerner to lead the party.

Also, PDP chieftains including Adebisi Olopoeyan, Mulikat Adeola, Ajibola Muraina and a host of others who played key roles in the governor’s re-election in 2019 have parted ways with him.

At the Thursday rally in Ibadan, the aggrieved governors disclosed that Makinde would reveal their preferred presidential candidate to the people of the state in no distance time.

The governors asked Nigerians to vote for all the party’s candidates for governorship, senatorial, House of Representatives and Houses of Assembly during the elections.

Benue State governor, Ortom, who was introduced by the host governor, Makinde, solicited support of the people of the state for the re-election bid of the governor.

Ortom said, “We want to assure you that the Integrity Group and the G-5 Governors are committed members of PDP in our various states. We have a challenge with the national leadership of our party because they have failed to deploy internal conflict resolution mechanism to solve the problems that arose after the convention.

The Abia State governor, Ikpeazu, also said, “Seyi Makinde is the Youth Leader of G-5, and he represents our vision for a better Nigeria, where there shall be respect for people and where everybody is important.”

Ikpeazu also appealed to the people to re-elect Makinde for a second term in office based on his achievements.

The Enugu State Governor, Ugwuanyi, stated, “We thank God for the gift of GSM (Governor Seyi Makinde). He has performed. He is active. Our prayer is that he returns to the Government House in 2023. I am a second term governor and by the special grace of God, I am in your support. Seyi Makinde will serve from May 2023 to May 2027 in Jesus Name.”

In his address, the Oyo State Governor, Makinde, appreciated his G5 colleagues, party loyalists in the state, and people of the state for their support in 2019.

The governor therefore reeled out his achievements and asked the people to support his re-election bid.

Other achievements listed by the governor include the growth of the state’s IGR from around N1.4 Billion monthly  in 2019 to about N3.8 Billion monthly  in 2022, securing the sole ownership of the Ladoke Akintola University of Technology, Ogbomoso, the upgrade of the Emmanuel Alayande College of Education to a University of Education and the renovation and equipment of over 250 health facilities across the state.

“I promised economic prosperity to the people of Oyo State under Omituntun 1.0. I said I would take them from poverty to prosperity. We have grown our IGR from N1.4bn every month in 2019 when we took over the reins of government to N3.8bn as of November 2022.

“Under Omituntun 1.0, I promised that our infrastructure would integrate all the zones of our state and target our economy. We have done the 65km Moniya-Ijaye-Iseyin Road. “There is Oyo-Iseyin Road; Ogbomoso-Iseyin Road; Apete-Awotan-Akufo Road; Airport Road; Akobo flyover and others.

“We scrapped the N3,000 education levy. “I promised that workers and retirees would get their full salaries and pensions on or before the 25th of every month; that date is now known as the GSM date and since 2019, workers and pensioners get paid.

“I promised the people a safe and secure environment, and we brought in Amotekun. I promised a government that will put the people first and all our decisions have shown just that. Now, it is time to upgrade. It is time for Omituntun 2.0.”

The former Minister of Federal Capital Territory (State), Akinjide said, during an interview, that she came in solidarity with Makinde and all PDP candidates in the forthcoming election.

The rally was attended by chieftains of the party, including former governors of Ondo and Ekiti States, Olusegun Mimiko and Ayodele Fayose, respectively; former FCT Minister (State), Jumoke Akinjide, and Deputy National Chairman (South) for PDP, Ambassador Taofeek Arapaja, who handed over the party’s flag to Makinde, the three senatorial candidates, as well as 14 House of Representatives candidates.

Atiku, the party National Chairman, Iyorchia Ayu, as well as Governor Ademola Adeleke of the neighbouring Osun State, and governorship candidates of the party in Ogun and Lagos States were absent from the programme.

Meanwhile, an Ibadan-based youth pressure group under the All Progressives Congress known as  Vanguard for Progressive Youths, has told Makinde to rescind his decision to run for second term in office and concentrate on his private life and business.

The group, in a statement on Thursday by its Coordinator, Ridwan Bello and Secretary, Kunle Adesiyan, described Makinde as “the most confused political player in the current dispensation.

“There is no gainsaying the fact that among the G5 Governors, the Oyo State Governor is in the greatest dilemma. This is not because he is the only one seeking re-election as governor but he is the weakest in terms of home support having lost the confidence of all that matter in Oyo PDP.

“There is no way Makinde would survive the electoral defeat in the hand of the APC candidate, Teslim Folarin, since his own people in Oyo PDP as well as major stakeholders in the state want him humiliated at the poll.

“Whatever position being advanced by Governors Nyesom Wike of Rivers; Samuel Ortom of Benue; Ifeanyi Ugwuanyi of Enugu; and Okezie Ikpeazu of Abia is secondary to Makinde whose personal goal is to secure a soft landing for himself after he would have lost his second term bid through the ballot.

“The same Makinde who gave out key appointments and patronage to only the lackeys who followed him to SDP in 2015 and returned with him to the PDP in 2018 cannot be said to be sincere in the agitation for power shift to the south this time.

“Even if Wike and his team get to strike a deal with the presidential candidate of the APC, Bola Tinubu, or any other person for that matter, providing a ground for Makinde to retain his seat, Oyo governor can never be part of the negotiation in view of the danger which such consideration portends.”

The group said Tinubu was conversant with the situation in the state and he would not dabble into anything capable of undermining the chances of his party, especially when those in charge had proved to be up to the task.

Oyelese disclosed that he intentionally boycotted Thursday’s G5 Governors’ campaign flag-off in Ibadan because they are working against the presidential candidate of the party.

Oyelese disclosed this in a telephone chat with The PUNCH, on Thursday.