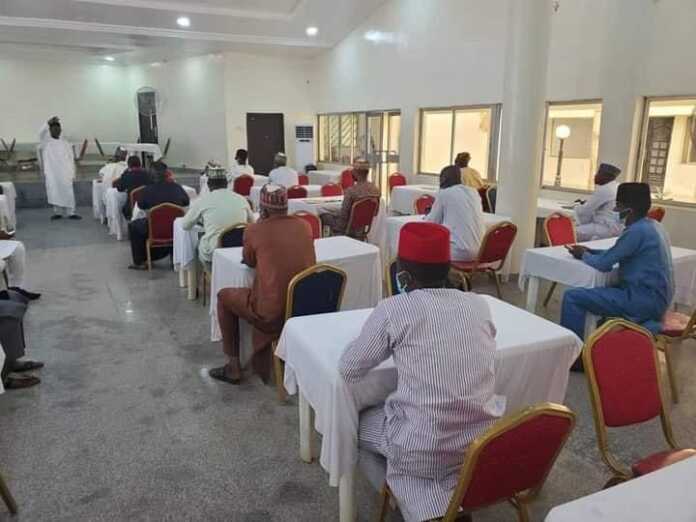 Ahead of the Kaduna state local government elections, the All Progressives Congress (APC) chairmanship aspirants have been subjected to written and oral examinations aimed at weeding out those that lacked the required capacity.

The 105 APC chairmanship aspirants for the 23 local government areas in the state are expected to undergo the two part examination after paying the sum of N1,100,000 (one million one hundred thousand naira only) to purchase the party’s chairmanship form.

NAIJA LIVE TV investigations revealed that following the examination, those who performed well will face the party primary election, while those who didn’t perform well will be stepped down to enable the party present competent candidates for the election.

The examination, which started on Wednesday and is expected to last until Friday, included a 30 minutes written feature before each of the aspirants will face a 17-man panel for the oral part of the examination.

One of the aspirants, who spoke with NAIJA LIVE TV in confidence, said he has gone through the written examination which he said was like writing one’s biography, adding that he doesn’t know what the oral examination will portend.

“We are 105 in number, so because all of us cannot do the examination together at the same time, we were divided into batches of 50, the screening committee was to finish with the first batch of 50 today (Wednesday) before facing the second batch of 55 tomorrow (Thursday),” he said.

According to another aspirant, they were asked to make available all their documents and to make 17 copies each for the screening committee members.

“I’m okay with this form of screening because it will ensure that whatever document we are presenting for the election cannot be queried or subjected to litigation by the opposition after the election,” he said.

Efforts to speak with Kaduna state APC officials were futile as call put through to the party chairman, Hon Emmanuel Jekada, was picked by someone else who said the chairman was unavailable, while the party spokesman, Alhaji Tanko Wusono, failed to pick calls put through to him.