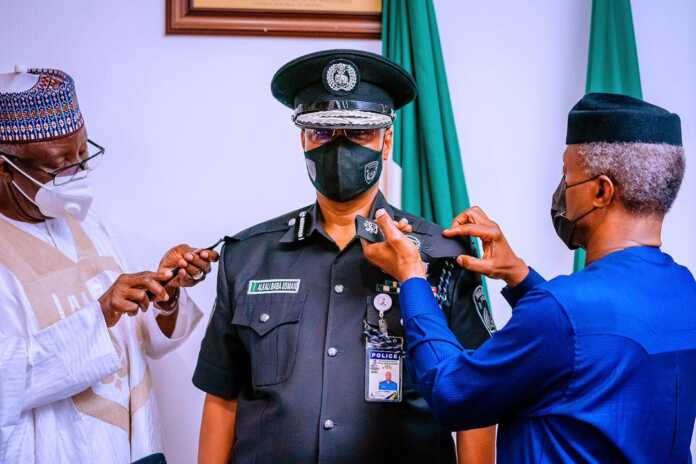 Acting Inspector-General of Police Usman Alkali Baba began his tenure on Wednesday with a pledge to confront “increasingly, complex and pervasive security threats” in the country.

He listed them as “terrorism, banditry, kidnapping, secessionist agitation and sundry organised crimes.”

Baba, 58, who was appointed on Tuesday, spoke at the Force Headquarters in Abuja after taking the reins from Mohammed Adamu.

Following his decoration at the State House by Vice President Yemi Osinbajo and Police Affairs Minister Muhammad Dingyadi, Baba was driven into the Louis Eder House at about 2:18pm in a Toyota Prado Sport Utility Vehicle (SUV).

He inspected the quarter guards before moving to the conference room where the erstwhile IG gave him the handing over note and the police flag to symbolise the transfer of authority.

Baba said: “Much as the challenge of leading the Force to address these threats in the shortest possible time frame, restore security order, and return our beloved nation to the path of national unity may appear daunting, I am inspired by the fact that from my extensive years of service, I can confidently say that the Nigeria Police is endowed with some of the finest, courageous and patriotic officers who, undoubtedly, shall support me to advance the internal security vision of Mr President.”

To achieve the task, Baba told reporters at the State House that “definitely, we are going to rejig our operational strategies.”

He asked Nigerians to “expect improvement in the security situation” and urged them to “collaborate and cooperate with us.”

Asked how he hopes to improve on community policing from where his predecessor left, Baba said: “We will continue to practicalise it. My predecessor has left it at the theoretical stage, we have started practicalising it but we have not gone far and therefore all the methods of practicalising it has been put in place and we are going to continue with it in collaboration with other stakeholders.”

However, Osun State Governor Adegboyega Oyetola at another event in Abuja, said Community Policing cannot address the escalating insecurity in the country because it is controlled from Abuja, instead of the states, from where they are operating.

He described the police as over centralised to be effective and canvassed state control of police.

Osinbajo told the new Police boss: “The organisation you are leading is one that is itself facing several challenges, your officers work in extremely difficult conditions and some face the threat of physical harm by terrorists and hostile non-state actors while in the line of duty.

“There is no question at all that there is a lot to be done.

“Under your leadership, the Police must now rebuild some bridges of trust and regain the confidence of the citizens.

“This is an on-going challenge and task that the Police Force and all the senior members of the Police must take on as a responsibility.

“They must continue to rebuild their trust with the Nigerian public.”

He charged him to implement the Community Policing Policy which had already taken off as well as restore the dignity of the Nigeria Police.

“One of the ways you can restore confidence and build trust is by implementing the Community Policing Policy which has already taken off and reconceptualising policing as a task carried out in partnership with local communities and officers who are members of these communities.

“Under your leadership, the force must live up to all the high standards of professional conduct and compliance with the Rule of Law.

“It must significantly improve the welfare and working conditions of its officers while rapidly scaling up its forensic, logistical and operational capacities to meet today’s challenges.

“You must stamp out the excesses and abuses and the culture of impunity demonstrated by some elements of the force which provoked public outrage against the institution.

“In short, your mission is nothing less than the restoration of dignity and high repute of the policing profession and the continuous oiling of that machinery, that enables it to be one that is respected by the public and the international community.”