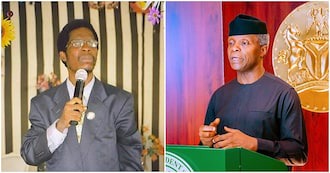 The cleric warned about a plot against Nigeria’s vice president, Yemi Osinbajo

However, the religious leader stopped short of disclosing the identities of those behind the alleged plot

Apostle Paul Okikijesu of the Christ Apostolic Miracle Ministry has predicted that some people from the northern parts of the country may sponsor impeachment proceedings against Nigeria’s vice president, Yemi Osinbajo.

The cleric who made the statement as part of his 2021 prophetic revelations, claimed that he received the divine predictions about Osinbajo among other issues on March 8, 2021.

Apostle Okikijesu advises Osinbajo to rely on the wisdom from God. Okikijesu stated that some people from the southwest will join the plot to impeach Osinbajo for selfish interests, with the goal to ruin the political career of the vice resident.

”Thus says the Lord of hosts: They will like to impeach him, in order to ruin his political career. But he should pray, so that I the Lord will arise to defend him against the Yoruba saboteurs, who joined forces with the Hausa to impeach him, because of their selfish interest and corrupt attitudes.”

The preacher also called for Nigerians to plead to God to forgive the vice president for mistakes he may have committed in office.

”Thus says the Lord of hosts: People should pray for Osinbajo because he has committed many mistakes and sins that are not hidden from I the Lord.”

Meanwhile, a section of Nigerian politicians has been accusing Vice President Yemi Osinbajo of being weak and in the dark as to the powers at play in the presidency.

Political heavyweights in this category believe that Osinbajo’s powers have been drastically reduced by an alleged cabal in a bid to swing the pendulum towards its direction.

However, the minister of state for labour and employment, Festus Keyamo, has dismissed these claims.

Keyamo in a tweet on Thursday, April 8, revealed that such power-mongers have only one intention: to pitch Osinbajo against President Muhammadu Buhari and thus egg the former on to rebellion.