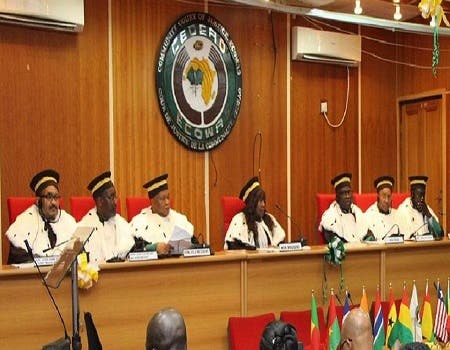 The ECOWAS Court of Justice sitting in Abuja on Tuesday restrained the Federal Government and its agents from prosecuting or doing anything whatsoever to harass, intimidate or arrest people for using Twitter.

The court, in the ruling on an interlocutory application, restrained the Muhammadu Buhari-led government from, “unlawfully imposing sanctions or doing anything whatsoever to harass, intimidate, arrest or prosecute Twitter and/or any other social media service provider(s), media houses, radio and television broadcast stations, the plaintiffs and other Nigerians who are Twitter users, pending the hearing and determination of this suit.”

The ruling of the court followed the suit filed against the government by the Socio-Economic Rights and Accountability Project (SERAP) and 176 concerned Nigerians arguing that “the unlawful suspension of Twitter in Nigeria, criminalisation of Nigerians and other people using Twitter have escalated repression of human rights and unlawfully restricted the rights of Nigerians and other people to freedom of expression, access to information, and media freedom in the country.”

The court, in its ruling delivered after hearing arguments from Femi Falana (SAN), representing SERAP and counsel to the Federal Government, Maimuna Shiru said, “any interference with Twitter is viewed as inference with human rights and that will violate human rights.”

The court, which assumed jurisdiction to hear and determine the case further ordered that the suit, as filed by SERAP be heard expeditiously and that the Federal Government must take immediate steps to implement the order, which restrained it from prosecuting or harassing Twitter users.

NAIJA LIVE TV reports that SERAP instituted the legal action after the suspension of Twitter by the Minister of Information and Culture, Lai Mohammed after the social media giant was banned in Nigeria for deleting President Buhari’s tweet.

The ECOWAS Court adjourned the hearing of the substantive suit till July 6, 2021

It would be recalled that SERAP and the concerned Nigerians had in the suit No: ECW/CCJ/APP/23/21 prayed for, “an order of interim injunction restraining the Federal Government from implementing its suspension of Twitter in Nigeria and subjecting anyone, including media houses, broadcast stations using Twitter in Nigeria to harassment, intimidation, arrest and criminal prosecution, pending the hearing and determination of the substantive suit.”

The plaintiffs said if their application is not urgently granted, “the Federal Government will continue to arbitrarily suspend Twitter and threaten to impose criminal and other sanctions on Nigerians, telecommunication companies, media houses, broadcast stations and other people using Twitter in Nigeria, the perpetual order sought in this suit might be rendered nugatory.”