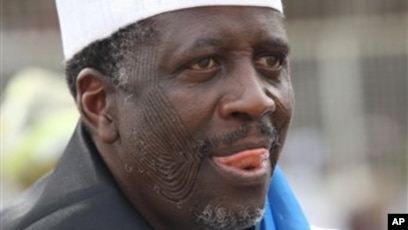 A Younger Brother to Ex-Governor of Sokoto State has been detained by Security Operatives for allegedly Supplying Terrorist Bandits With Army Boots and Uniforms for their illegal operations.

Upon his arrest, the Ex-governors brother [Name Withheld] was taken to the Government House, Gusau, where he was interrogated by Governor Alhaji Muhammad Bello Mutawalle and other top government officials (parts of the information were blocked in the video)

Probing the suspect, the security officials asked if he was actually working hand in hand with Rtd Colonel Garba Moyi, Sokoto State Commissioner for Internal Affairs and Security and also Alhaji Bashir, a staff of Sokoto State Ministry of Health, which he had earlier indicated in his statement.

After taking an oath that he would tell the truth, he confessed that he had been supplying boots and military uniforms, which he said he purchases from School Leather Technology, Zaria, to bandits. He also revealed that, whenever the bandits got wounded during operations, he would treat and give them the necessary medical attention that they needed.

He further revealed that he had been involved in these criminal activities for a long time but unknown to him, the security agents had received a report about him, had all his phone lines tapped and also arranged some people to buy boots and military uniforms from him.

He said these customers would always meet him one on one to make the payments directly and collect the items.

According to security reports, last Friday, the accused negotiated with bandits that some uniforms and boots will be given to them after the second payment of N265,000 was made. He delivered the boots to them on Sunday at 9am.

During the interrogation, Gov. Mutawalle asked the accused whether he was aware that the people he gives medical treatment to are involved in killing, kidnapping and destroying the lives of innocent citizens of Zamfara State, to which the suspect confirmed that he is fully aware of the criminal activities of his customers.

In a related development, Zamfara State government has also arrested a Military officer and his girlfriend who have been involved in buying and selling of guns to bandits. They have since been handed over to the military authorities for prosecution.

I have 23 Oil wells in Niger-Delta, I won’t allow anybody to divide Nigeria – Sultan of Sokoto