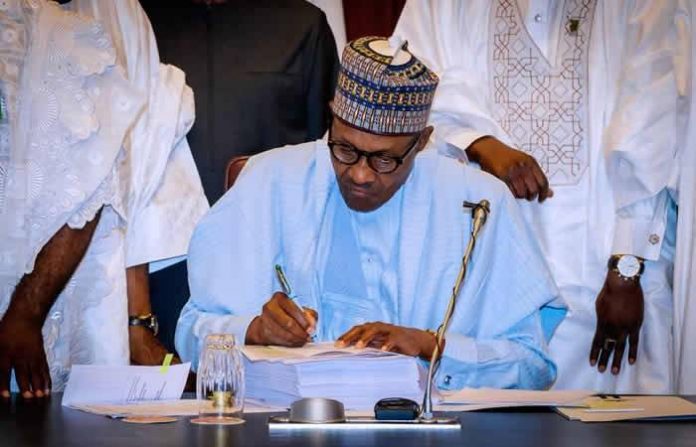 President Muhammadu Buhari has signed the 2018 appropriation bill containing the year’s federal spending details as approved by the National Assembly.

Mr Buhari signed the budget at about 12 noon on Wednesday inside his office at the presidential villa Abuja.

The total budget is N9.1 trillion, up from the N8.6 trillion estimates he submitted to the Assembly on November 7, 2017.

The two chambers of the National Assembly passed the budget on May 16, six months after it was presented by the president.

The Assembly raised the total figure by N500 million.

They also increased the oil benchmark proposed by the executive from $45 to $51 per barrel.

The Assembly, however, retained oil production volume proposed at 2.3 million barrels per day and an exchange rate at N305 to $1.

The budget as passed by the two chambers also has N530.4 billion as statutory transfer; N2.2 trillion for debt service; N1,95 trillion as fiscal deficit.

The passed budget was transmitted to the presidency for assent on May 25 through the Senior Special Assistant to the President on National Assembly (Senate), Ita Enang.

Mr Enang on Wednesday took copies of the budget to the office of the president.

The budget signing ceremony was attended by the Deputy Senate Leader, Bala Na’Allah.