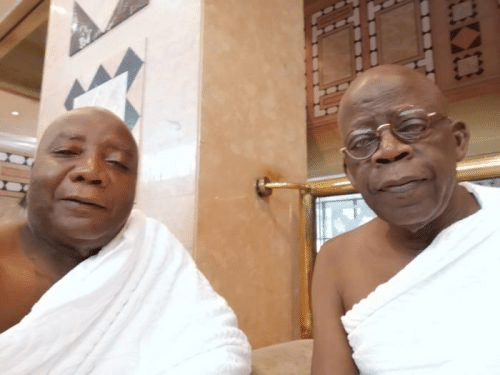 The National Leader of the All Progressives Congress and Presidential aspirant, Bola Tinubu has travelled out of Nigeria to Saudi Arabia.

The former Lagos State Governor is in Saudi Arabia to perform Umrah, the lesser hajj.

Tinubu is in Saudi Arabia for spiritual consultation ahead of the 2023 general elections.

This is coming after President Muhammadu Buhari invited Tinubu and other leaders of the ruling party to break the Ramadan fast with him on Tuesday.

The APC leaders invited by the President are expected to start arriving at the State House Conference Centre by 4.30 pm for a Rapid Covid-19 test ahead of the dinner meeting.

Others on the list of guests include former National Chairmen of the APC, John Oyegun and Adams Oshiomhole; former Adamawa State Governor Murtala Nyako as well as former Ogun Governor Olusegun Osoba.

However, Tinubu would not be available for the invite as he is currently out of the country.