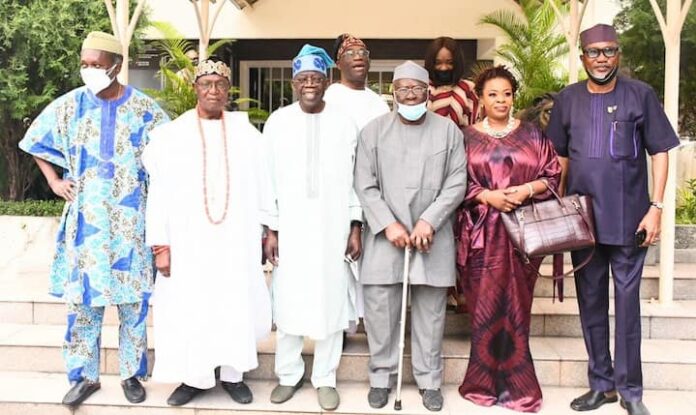 Afenifere chieftains, including Chief Ayo Adebanjo, have visited APC chieftain Bola Tinubu in Lagos The visit comes days after the former Lagos governor returns from a medical trip to the United Kingdom Meanwhile, many political leaders in the country have been paying visits to Tinubu since his return from the UK.

Leaders of the Pan-Yoruba socio-political group, Afenifere, have paid a visit to the national leader of the All Progressives Congress (APC), Asiwaju Bola Tinubu, at his home in Lagos, The Punch reported.

This is coming days after Tinubu returned from a medical trip to the United Kingdom where he underwent knee surgery.

The visit also comes amid the strong speculations that the APC chieftain is interested in succeeding President Muhammadu Buhari in 2023.

Meanwhile, Tinubu has continued to receive visitors since his return from the UK. Former Senate president, Ken Nnamani, also paid him a visit at his Lagos residence, on Wednesday, October 13. The prominent southeast politician commended Tinubu for his contributions to the growth of democracy and good governance in Nigeria. Nnamani also presented to Tinubu his new book titled “Standing Strong: Legislative Reforms, Third Term and Other Issues of the Fifth Senate,” due to be presented on Thursday, October 21, in Abuja.

In a similar development, former Ekiti state governor, Ayodele Fayose, on Tuesday, October 12, visited the Lagos residence of the APC stalwart, Tinubu, to felicitate with him after his return to the country.

The visit, however, sent tongues wagging with some political watchers suggesting that Fayose might be heading to the APC.

However, Fayose clarified that despite his visit to the former Lagos state governor, he remained a Peoples Democratic Party (PDP) chieftain. Tinubu happy to be back home Tinubu had earlier expressed thanks to God for bringing him back to Nigeria safely when he spoke at the State House in Marina, Lagos at a gathering to welcome him home. Present at the gathering were the wife of the governor, Mrs Ibijoke Sanwo-Olu, Deputy Governor Obafemi Hamzat; his wife Oluremi; former Lagos Deputy Governor Mrs Idiat Adebule, and House of Representatives Speaker Femi Gbajabiamila. Lagos Speaker, Mudashiru Obasa; Senator Olamilekan Solomon, among others were also present at the event.