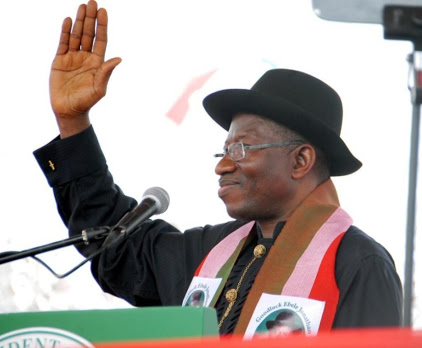 Former President of Nigeria, Goodluck Ebere Jonathan yesterday delivered a lecture at Texas US on why remaining indivisible with Nigeria than joining forces with Biafrans in splitting the country will pay Niger Deltans more.

When I use the term Niger Delta, I am referring to the region covering Delta, Edo, Bayelsa, Rivers, Akwa Ibom, and Cross River states. However, I understand that the region also covers Ondo, Imo, and Abia states. I’m not concerned with the latter because they are either Igbos or Yorubas and have their own struggles. The ethnic groups within my coverage include Urhobo-Isoko, Bini, Esan, Itsekiri, Ijaw-Epie-Ogbia, Ogoni, Afemai, Efik-Annang-Eket-Oron-Ibibio, Ogoja, Ejagham, and other groups in Cross River North. Ikwerre, Ukwuani, Ika, Aniocha, Ogba, and other Igboid groups, are not included. Historically, Biafra covered all the Niger Delta states EXCEPT Delta and Ondo states. This fact must be emphasised.

Pro-Biafrans are welcome to debate and address my issues in a civil manner. I understand that most pro-Biafrans resort to insults when salient issues are addressed.

1. Biafra may not be better for Niger Deltans because Niger Deltans may end up living one form of subjugation for another. The argument Igbos have made for their freedom is the desire to be free from Hausa-Yoruba domination. That argument also applies to the average Niger Deltan. Igbo, no doubt, will be the major ethnic group if Biafra is actualised. Ijaws may have a stake due to their numbers. What about the Ogonis, Urhobo-Isokos, Itsekiris, Efiks, etc? Where will they fit in at the national level? The sad reality is that another Nigeria will just be made manifest and resentments will build up. What will really be the fate of minorities? Will they fare better in Biafra or alone? In Nigeria, big groups such as Hausa, Yoruba and Igbo checkmate each other’s excesses very well. Who will checkmate that of Igbos in the new nation?

2. Where will the capital be located? If we are to follow the notion of central location, the capital of Biafra won’t be Enugu but around Umuahia-Ikot Ekpene axis. Will Igbos allow their capital to be sited in a non-Igbo location? This is a very salient issue because you don’t expect the riverine Niger Deltan in Twon-Brass, for instance, to journey all the way to Enugu to see their President. It has to be a location where ALL BIAFRANS can access easily. Enugu won’t go.

3. The issue of annexation comes to play. For so long, e-Biafrans have annexed Niger Delta as part of the proposed nation. The map below shows us what Biafrans have drawn to constitute the new nation:?

If we judge from this map, it means all groups in the Niger Delta have been annexed. My question is whether the leaders of these groups have been consulted before the annexation was done. I, for one, know that Urhobo-Isoko and Efik-Ibibio leaders have not approved of Biafra neither have anybody in these regions declared Biafra. So how and why were they included in the proposed map? Little things like this bring distrust and I understand that many of these non-Igbo regions have disowned the map and pledged allegiance to Nigeria. The declaration by the Delta State government is a case in point. I see this as forceful annexation. The so-called e-Biafrans have also not done much in calming the nerves of the people of the annexed regions. I’ve seen comments such as “if you don’t like it, go and stay in Sokoto”, “all land in the South is Biafraland”, etc. Is it not ironic that a group of people who want freedom want to annexe others?

4. What languages will be made the official languages of the new nation? I have seen several posts by e-Biafrans where Igbo was proposed as the official language of the new republic. What then will happen to other languages such as Urhobo, Isoko, Okpe, Efik, Ibibio, Oron, Ogoni, Eleme, Okrika, Kalabari, Bini, Esan, etc? Will they die off because of Igbo? Certainly NOT! If English is made the official language, the Igbo majority factor will kick in. If your name isn’t Chukwuemeka or Oliseh, Amarachi or Nneka, etc, you won’t get any appointment nor shall you be recognised. These are things we can’t deny. We are very ethnocentric in Africa.

5. What and what have Igbo nation done for Niger Deltans to gain their trust? Every day I see Igbo youths making enemies where there were none. They constantly use the agency of the internet to sprout controversy, hurl insults at dissenters and make unfounded claims. There is this general air of mistrust for Igbos by some Niger Deltans, particularly by Urhobo-Isoko and Bini people. What have Igbos done to checkmate this? Has any Igbo leader or group extended the hand of friendship to the Niger Deltans. Mistrust cannot be wished away. Most Niger Deltans would rather follow Hausas as slaves than follow Igbos as kings. This is the real reality and truthfully, Igbos caused this.

6. Who will lead the new nation? Obviously, Nnamdi Kanu, their hero, has fought tooth and nails for Biafra and he is currently cooling off in jail. If Biafra comes today, who will be the interim leader and what modalities are in place for subsequent leaders to be elected? Igbos have been the only ones fighting for Biafra since time immemorial with a handful of other groups here and there. Will Igbos allow other groups to rule over them? Will they allow an Urhobo man to be President, for instance? This is not a case of mere wishing. We have to understand that Niger Delta groups MAY NEVER BE ALLOWED TO RULE BIAFRA IF IT IS ACTUALISED.

7. Still on the issue of leaders, are the new leaders going to fall from the skies or they are simply going to change addresses from Abuja to Enugu. If so, what will change in the new nation? It is not arguable that Igbo national leaders are the most corrupt persons in Nigeria. If these same people are the ones to rule the new nation then there is no hope because corruption will be so rife that the economy of the new nation will shut down like a knocked engine. If we argue that new and younger leaders will arise, we still have the issue of who fought for Biafra to contend with. Most pro-Biafrans will not allow someone who sat at the periphery of the struggle to just come and waltz power away from the “heroes” of Biafra. If this is true then we will not have a proper democracy in Biafra.

8. Will Biafra be a utopia? The impression that e-Biafrans give is that Biafra will be perfect and we all know for a fact that this is not true. Apart from the issue of corruption and sentimentalism that have been addressed, we still have the issue of development. Where will money be generated from to develop the nation? In the whole of the proposed Biafra, only Port Harcourt and Onitsha are economically viable cities. Where will the investors come from? Why should they invest in a volatile country? Only in Warri, we have Ijaw, Itsekiri and Urhobo at loggerheads, imagine what would happen to the whole nation. Secondly, I am sure that no Niger Deltan will allow his “oil” to be used to develop Enugu like what happened with Abuja, and is still happening today. Niger Deltans are getting wiser and by the time the new nation is formed, matters that border on oil, wealth distribution and infrastructural development will be raised.

9. The current structure of the proposed nation, as shown in the map earlier embedded, favour Igbos with more states. Urhobo has one, Efik-Ibibio has two, Itsekiri has none, etc. How will this be addressed? Certainly, every ethnic nationality will want adequate representation and so the structure on that map will never work.

10. Last, but not the least, is the issue of referendum. Some Biafrans are already calling for a referendum which will involve all parts of the proposed nation. I am pretty sure how this referendum will turn out. However, for the sake of being hypothetical, let us imagine that some ethnic groups/states vote against Biafra by the majority, what will be their fate at the end of the day? Secondly, will the result of such a referendum be true and honest? I understand that electoral malpractice forms a part of our identity. How are we going to get a true reflection of people’s thoughts? Thirdly, if states and ethnic groups do decide to vote for Biafra, what mechanisms are in place to contain Igbophobia, Igbomania, Igbocentrism, Igbo hegemony, Landgrabbing, and all issues that minorities have raised?

Above are the reasons why I feel that Niger Deltans will NOT subscribe to the Biafran movement. I have been very practical, philosophical and hypothetical in my approach. I do not speak for any group or persons but I present these issues for the pro-Biafrans to address. Niger Deltans can raise more issues that I have not raised. Finally, it should be noted that I expect insults directed at my person by e-warriors and keyboard mercenaries, as usual, but I won’t pleasure such persons with answers or altercations. If you raise good points, we can discuss like intellectuals.

Group lauds Northern Youths, APC for having faith in...