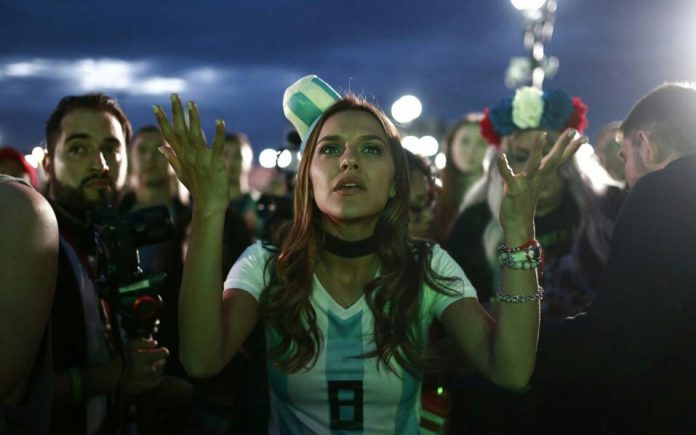 The party at the Buenos Aires fanzone fell flat as a crowd expecting a Messi-inspired Argentina World Cup revival could only watch in horror at as the nadir of Nizhny Novgorod unfolded.

“We lost very badly, they really humiliated us this time,” said 22-year-old Joaquin. “And now, on top of that, we’re depending on Nigeria!”

After the abject 3-0 loss to Croatia, the team will have to beat Nigeria in their final game and hope other results go their way to advance.

For even the most passionate fans here, that seems a tall order now.

Lionel Messi came in for particular criticism after an under-par performance.

“Messi, who keeps winning for Barcelona, who continues to deliver triumph after triumph for Barcelona, has given us nothing but defeats and sadness,” said an angry Miguel Angel Gutierrez, 50, wearing an “Albiceleste” wig.

But this was no party in Buenos Aires as fans young and old hid their sky blue-and-white painted faces in their hands, the classic reflexes of cinemagoers at a horror movie.

Some wept and others hugged each other like survivors at a disaster scene. One man stood and gestured angrily at the big screen as passes went astray on the pitch in Russia.

The World Cup was supposed to provide a glitzy distraction for Argentines who have seen their purchasing power steadily eroded by subsidy cuts, IMF-inspired reforms, and a crippled national currency.

“We are very sad because it’s all wrong! Just look at the dollar, we are very tired of everything. We trusted in this team,” a despondent Alfredo Dominguez, 48, said from under his blue-and-white-striped hat, which said “Messi 10”.

The nation faced a long night of TV pundits arguing loudly about the shortcomings of Jorge Sampaoli’s misfiring team, and what he could do to inspire them for the next match against Nigeria.

Zulma Suarez smiled sadly and sighed as she reflected on the shattered hopes of a nation that has already suffered through a 1-1 draw with Iceland in its first game.

“I thought we would get there, that it would get easier as we went along. But well, as an Argentine, I feel my country in my heart.”

Russian authorities clamp down on migrants with fan cards