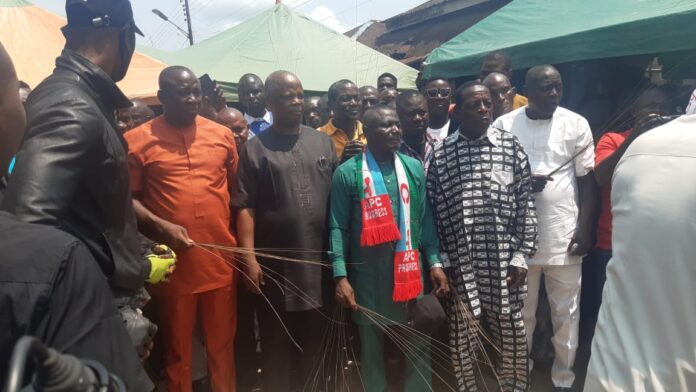 Former Commandant of the National Defence College, Abuja, Rear Admiral Thomas Lokoson (rtd) has stated some Political reasons why he dumped the All Progressive Congress (APC) in Bayelsa State for the People’s Democratic Party (PDP).

According to Lokoson, the decision to dump APC for the PDP was made possible by the performance of the administration of Governor Douye Diri particularly in the area of infrastructural development and Education.

Rear Admiral Thomas Lokoson (rtd),while speaking during the welcoming rally by PDP faithful at ward 5,constituency 1 of Otuan community of Southern Ijaw Local Government council at the weekend expressed appreciation to the PDP for welcoming him back to the party, insisting that the present administration has the interest of Bayelsa people at heart.

Lokoson said “I have decided to come back and I wish to thank the leadership of the party for welcoming me back and accepting me, I have studied and watched the keen interest of any political development, economic development going on in bayelsa state and I thought as a Bayelsan that has the interest of the state at heart , it is time for me to go back . Moreover as I stood and looked back I saw only three people that are still behind that we will work very hard to bring them back onboard.”

He however promised to re-introduced his foundation’s scholarship scheme with the inauguration of a special committee to accredit and screen Ten first beneficiaries of the scheme by September, 2021, “We are taking after our miracle governor because our miracle governor is a transparent governor and he has touched the lives of the Bayelsans, he is a governor that has achieved a lot in his one and half years onboard.”

A chieftain of the PDP from Ward 5 in Otuan Community, Comrade Emmanuel Jonjon, noted that the fold of the PDP in the area is growing stronger with the decision of Rear Admiral Lokoson joining the party,” Lokoson is an asset to the state and not just Otuan community or ward 5. We welcome you in ward 5 there is no bigger person nor small person together we do consultation before we make any decision.”

Earlier in his speech, the State Secretary of PDP, Hon. Gesiye Isowo, said the recent gale of defection into the PDP family in the state is attributed to the democratic directives of the party in the state, “It means the party is moving forward , these are the attributes of democracy and that is to prove once again that the people democracy party is always working to free and fair election , is only people that will work free and fair election that will go out and beg people to come to its party and that is exactly what we are doing , this is the directive of the leader of the party the miracle governor of bayelsa state , Senator Douye Diri .”

“Gov. Douye Diri gave a very clear directive of who came onboard and that is exactly what we are doing in every ward, every man’s responsibility. He has given us the Ministry of Reconciliation to reconcile everybody back to the PDP. And what I saw here is wonderful.”