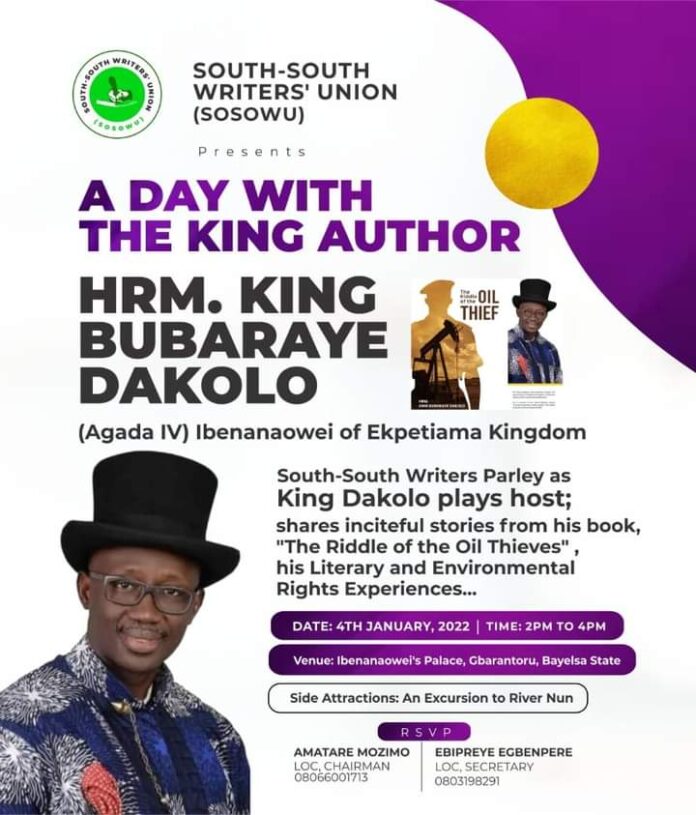 The new year 2022 is starting on a bright note for literary writers in Bayelsa State as seasoned and award winning authors from other Niger Delta States are converging on Yenagoa, the Bayelsa State capital, on Monday January 3, to Tuesday January 4, 2022.

The occasion is the formal inauguration of the Bayelsa Chapter of the South-South Writers’ Union with the acronym, SOSOWU.

It has other itinerary lined up for literary enthusiasts from the region including excursions to reading facilities and cultural sites of interest as part of literary tourism experience in Bayelsa State.

On Day One of the event, Monday January 3, 2022, the Ibenanaowei of Ekpetiama Kingdom, King Bubaraye Dakolo, is billed to play host to the visiting guests at his palace in Gbarantoru by 2pm prompt to share his motivation and experiences in his book, “The Riddle of the Oil Thieves”

The King shall also lead the visitors on a guided tour to literary sites of interest in and around the ancient kingdom of Ekpetiama including a tour to the famous River Nun written about in the late Gabriel Okara’s poem, “The Call of the River Nun”

The occasion shall also take visiting writers from the South-South region on a tour to the Niger Delta Heritage Museum at the Azaiki Public Library as well as some major libraries and bookshops in Yenagoa, the Bayelsa State capital and his environs.

Media partners of the event such as NAIJA LIVE TV, Rhythm 94.7 FM and People’s 93:1 FM are also earmarked for recognition for their support of literary education to the public at the formal inauguration of SOSOWU in Bayelsa State.