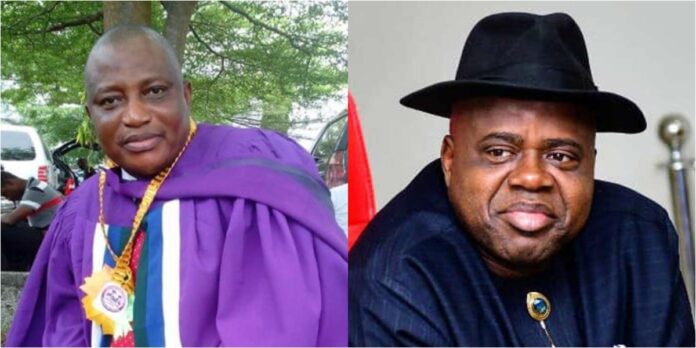 Ex-official of the Bayelsa State Government, Dr. John Idumange has send a distress message out to alert the general public should in case anything happened to his life.

Idumange an SOS message said the Senator representating Bayelsa west, Chief Seriake Dickson has paid two people to poison him if eventually he is remanded back to prison, says plans are on the way.

The former GM of the state own Radio Bayelsa said that About 80% of the beneficiaries of the alleged diverted N3billion Agric Loan are people loyal to the Deputy Governor and former Governor Seriake Dickson. That the money was squandered exactly as he claimed in his earlier statement. That the EFCC has allegedly frozen their accounts.

“The EFCC has obtained all the facts about the Agric Loan, how the money was paid into the accounts of politicians and their fronts.”

“About 80% of the beneficiaries are people loyal to the Deputy Governor and former Governor Seriake Dickson. The money was squandered exactly as I said in my statement. As we speak, the EFCC has frozen their accounts.

“In a panicky measure, they have transferred the case to Justice Uzakah’s court challenging my bail.”

“The grand plan is to use the High Court to remand me and Somebody disclosed to me that if I am remanded, Henry Seriake Dickson has paid two people to poison me.”

“I am writing this to let you know that if anything happens to me, the public should know who to hold responsible. In the world we live in, bad things happen to good people.”

“They have a very bad case and they feel that maltreating me will shut me out.”

It is my conviction that you take this note seriously because government is looking for a way to punish me for blowing the WHISTLE concerning the N3billion Agric Loan.”

The former official, John Idumange, headed a state-run radio station, Radio Bayelsa, and was also an aide to the former governor of the state, Seriake Dickson.

The N3 billion loan was obtained from the Central Bank of Nigeria by Mr Dickson’s administration which Mr Idumange was part of.

Mr Idumange who said he has filed a complaint with the Economic and Financial Crimes Commission against Mr Diri’s administration, claimed he had so far recorded 17 cases of diversion of the loan.