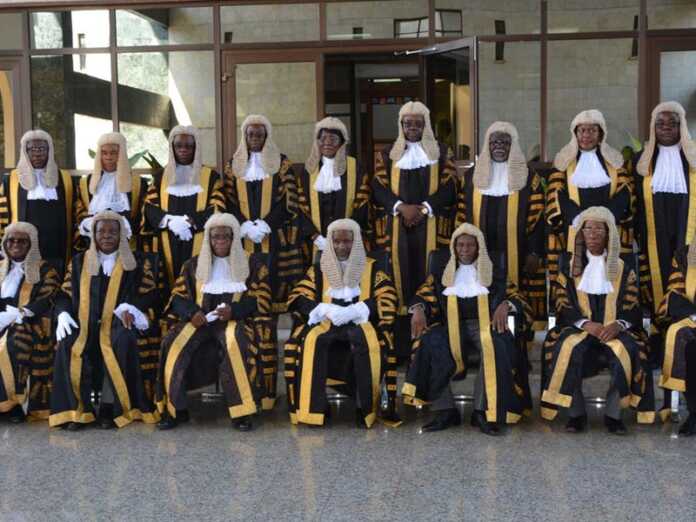 The existence of the three arms of government is to ensure fairness and to eschew arbitrariness in government business, more particularly in a democratic system of government, generally believed to be the government of the people, for the people and by the people.

Therefore, it is not out of place for the judiciary to function optimally, in order to fulfil her existence as an arm of government. But worrisomely, the judiciary had not properly considered the cardinal role of the people that is central in democratic processes that elicits participatory democracy in a manner that the people’s votes count.

The above scenario is copiously displayed in the Bayelsa State Governorship Election Tribunal judgement in 2020. This, in a lighter note, is a sad commentary in place by the main actors of the judiciary as it forces one to reason that judgements these days have commercial underpinnings. In other words, the actions of the judiciary in recent times had inadvertently placed the interest of an individual to reign paramount over the wishes of the masses, as votes never count.

As we could recall the remarks of notable international personalities years ago, society gravitates to the oblivion because of the silence of the wise. According to Haile Selassie, “Throughout history, it has been the maction of those who could have acted”. The indifference of those who should have known better, the silence of the voice of justice when it mattered most, that has made it possible for evil to triumph.

It is for the common good that judgements are delivered by our judges but when same becomes an issue in the mind and brain of a given people as the case of Bayelsa state, Peace remains elusive and hangs on the balance. The place of peace is paramount and needs not to be de-emphasized, more particularly because democracy is centred on the people. So, how will the votes of the majority not count? Rather, judgements now engender minority rule that is not in consonance with democratic norms and values as they assume coup-like manner of bringing a government to bear for a people, because judgements currently undermine the role of majority votes.

The above illustration equally brings to bear the previous write-up captioned, “Bayelsa State: an experimental destination”. Unfortunately, the judiciary had caused drawbacks to the democractic process, norms and values, knowing fully well that democracy emphasizes the role of the people via the votes cast and as declared by the electoral umpires.

Secondly, the Nigerian judicial system has departed from its traditional role of creating novel inputs that will transform society of late, as what is being witnessed is movement without motion; first things come last. This is the case in the pre-election matter, as Appeal Court sitting in Port Harcourt ordered the immediate commencement of the retrial process of former governor of Bayelsa State, Sen. Dickson Seriake. Whereas, on 11th November, 2020 the same matter was struck out in a federal high court in Yenagoa for want of jurisdiction.

Now that the Appeal Court in her own wisdom directed that the case be tried again at the lower court ;
the question yet to be answered is the time lost; who profits or does it not confirm that justice delayed is justice denied or what is the penalty for the federal high judge for the conspicuous show of misdemeanor; or will the case still assume the status of pre-election matter that is time bound in the Nigerian State. Moreso, as Sen. Dickson Seriake heads to supreme court, will the supreme court give the pre-election matter the desired attention? While the backward and forward movement occurs, Sen Dickson Seriake remains in office, pending the determination of the matter.

However, we hope that the case might not end-up being an academic exercise because there seems to be no extant law to expressly address the otherwise out-comes.

This calls for the judiciary to be more effective and efficient in addressing the missing links, so that standardization of electoral matters will be instituted, which will make participants equally to have confidence on the judicial arm of government. With the current trend, there is increasing lost of fate concerning the judiciary, more particularly, caused by electoral matters in the last decade.

Interestingly, the judiciary can ensure that pre-election matters do not assume a life-time dimension. There are instances where pre-election matters lasted as long as three years plus. In this context, the judiciary allowed themselves to be used and in certain cases wrongly determine the process of adjudication of cases and composition of judicial penals as more than four judges handle the same matter, as a result of transferring the matter from one court of coordinate jurisdiction to another. Hence, such matters always start denovo, making elected legislators to remain outside unduly and unnecessarily while the others enjoy the tenure of the actual winner.

As it stands now, the pre-election matter involving Sen. Dickson Seriake may be assigned to the third federal high court judge, with the directive or outcome of the Court of Appeals, sitting in Port Harcourt. This was like the case involving Hon. Ofoni Daupuamo Williams and Hon. Dickson Seriake, which lasted for three years plus and with four judges in 2010.

While Nigerians await the outcome of the supreme court judgement on the matter, it is the prayer of Nigerians that the issue in question shall not be a mere academic exercise as witnessed in certain previous issues. The lexicon in place on streets is the joke of the year, often put in an interrogative form: Have the courts voted? Meaning majority votes are meaningless, arising from the 2020 supreme court judgement on Bayelsa State Governorship election.

At this juncture, the legislative arm must create meaningful impact and be alive to its responsibilities by causing amendments to our electoral laws expeditiously, while the judiciary contributes are own quota meaningfully and let the desire of the electorates be respected in a manner that technicalities do not override the people’s wish. In the same vain, unnecessary delay tactics employed by either parties involved be addressed by the judiciary, despite stipulated time frame for electoral matters.

Again, as a measure to check seeming excesses on the part of the judiciary, judges that fail to release records of proceedings within 72 hours on application by a needed party should be sanctioned seriously by NJC. By so doing, the unethical practices prevalent in the judiciary such as commercialization of Justice, unnecessary delay tactics in the process of Justice dispensation, simultaneous handling of a matter by courts of coordinate jurisdiction or flagrant abuse of court processes, and others will receive desired attention.