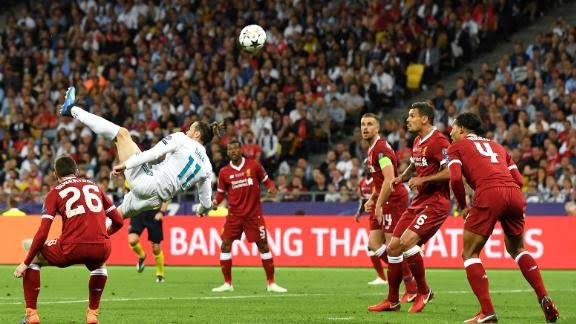 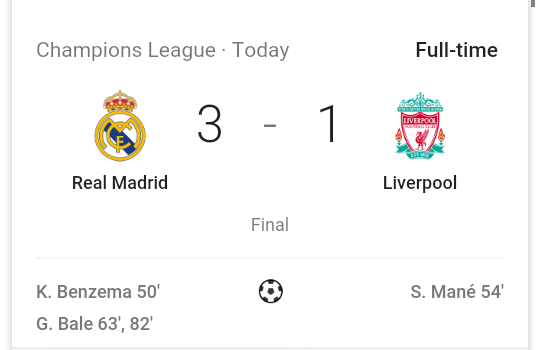 They may be second best to Barcelona of late domestically, but Real Madrid beat Liverpool 3-1 to make yet more history in Europe indeed. Billed as a duel between Ronaldo and Liverpool’s Mo Salah, Gareth Bale instead grabbed the spotlight coming off the bench.

Salah, meanwhile, left the game in tears in the first half after injuring his shoulder and his World Cup campaign with Egypt is in doubt.

It is now three titles in succession for Real Madrid to match Bayern Munich’s feat from 1974-76 and no team has won more than Los Blancos’ 13 crowns overall.

Saturday’s final at the Olympic Stadium in Kiev will be remembered, most notably, for Bale’s sumptuous 64th-minute winner courtesy of an overhead kick — he only came on in the 61st.

“To score a goal like that on the biggest stage in world football is a dream come true,” said Bale. “I’ve never actually scored a bicycle kick. I’ve had many attempts and it’s been something I’ve always wanted to do.”

Let the debate begin: Which was the better goal, Bale’s or Ronaldo’s overhead kick against Juventus in the semifinals.

The Welshman would go on to collect his second in the dying minutes to put the Reds away.

Karim Benzema had opened the scoring for Real Madrid in the 51st minute in unusual circumstances, only for Sadio Mane to level in the 55th. Mane shone for Liverpool in Salah’s absence, later hitting the post and forcing Sergio Ramos to make a last-ditch interception as he charged toward goal when it was 2-1.

Aside from Mane, two Liverpool players won’t be forgotten, either. Unfortunately not for the reasons Liverpool fans would have wanted.

Salah was left in severe pain after tangling with the robust Ramos, while keeper Loris Karius was at fault for two of the three Real Madrid goals.

“I don’t know what happened,” said Karius. “I just feel very sorry for my teammates, for losing the final.”

Liverpool controlled proceedings prior to Salah’s shoulder injury but were never the same afterward.

In perhaps the game’s most poignant moment, he was consoled by Ronaldo as he was substituted in the 30th minute. They both scored a staggering 44 club goals this term.

The Portuguese knows what it is like to depart a big final hurt, doing so in the Euro 2016 finale against France.

Salah, according to initial reports, suffered from a dislocated shoulder.

The goalkeeping position has been a source of concern for Liverpool supporters the entire season, with Klopp finally settling on Karius after benching Simon Mignolet.

Karius is only 24, especially young for a keeper, and his inexperience cost Liverpool dearly.

In no danger as he collected the ball in the 51st minute, he attempted to throw to a teammate with Benzema lurking. Benzema alertly stuck out his right leg to intercept the pass and steer the ball into a gaping net.

Karius wanted a foul but to no avail, and rightly so. There was quite simply no infraction. 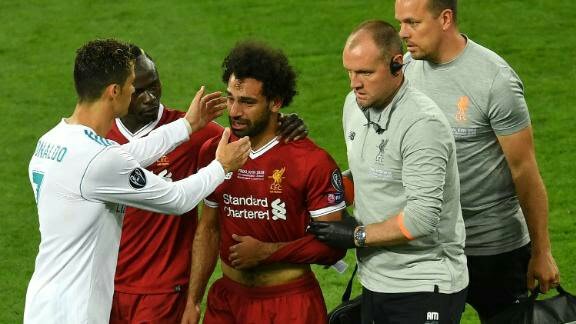 With Salah gone and conceding in such a bizarre fashion, you thought that might be it for Liverpool.

Mane, though, gave Liverpool hope when he latched on to Dejan Lovren’s header from a corner to make it 1-1.

Liverpool led the Champions League in scoring entering the final, 10 goals better than Real Madrid, yet it would be the Reds’ lone goal of the night in Ukraine.

Klopp mused before the game that Real Madrid’s substitutes could make a Champions League final themselves and how right he was given Bale’s impact.

Credit must go to Real Madrid manager Zinedine Zidane, who called on Bale just at the right time. His first goal had Zidane and Klopp purring.

The Welshman made it 3-1 in the 83rd when his shot went through Karius. Swerving, yes, but it was from distance and Karius appeared to have a clear view of the left-footed strike.

Karius, in tears, made a gesture of apology to the Liverpool fans decked out in red at the final whistle.

Zidane has been under pressure in the Spanish capital due to his team lagging behind bitter rival Barcelona in La Liga. But he has the golden touch in finals, winning all eight he has managed for Real Madrid, while Klopp has lost seven of his eight including his time in Germany.

Real Madrid did it the hard way in the Champions League, too, this season, eliminating the French, Italian and German champions prior to Liverpool.

“It is very unusual that a keeper makes two blunders like Karius did today,” UEFA quoted former German international Michael Ballack as saying. “Nevertheless, Real’s victory was well earned, they were more mature and they are the right winners of the Champions League.”

Liverpool had been the last side to beat Real Madrid in a Champions League or European Cup final, in 1981.

Twenty seven years later, there was some revenge for the undisputed Kings of Europe.

Champions League: Barcelona under attack over 4-0 loss to Liverpool