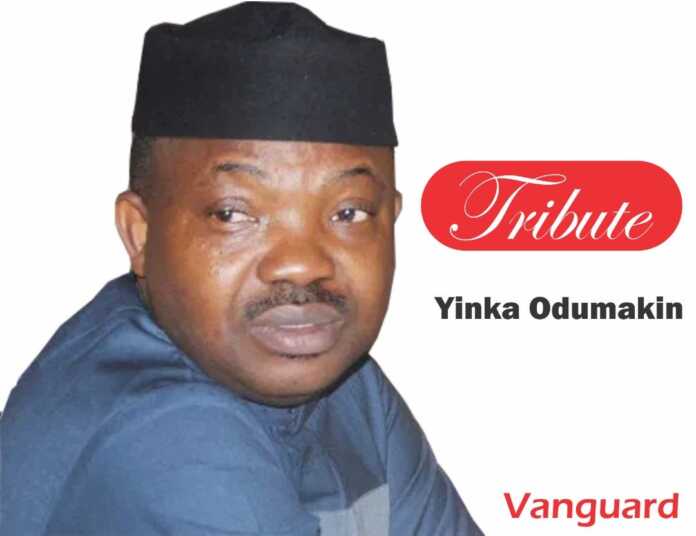 As the curtains fall on Comrade Yinka Odumakin’s 54 years sojourn on earth, the Moro community, his hometown witnessed an influx of sympathisers, many of whom would not have ever stepped into the town but for its light which suddenly extinguished.

Since Friday when the Osun State Government received his body accompanied by his wife, Joe, and was escorted by the state government delegates, Yinka’s native town and his country home located at Ewuru street, was the beehive of activities as sympathisers thronged the community. Some to commiserate with the aged parents, while others were simply in the sleepy town to pay their last respect to a spokesperson who suddenly stops speaking.

Friends from the media, his immediate Constituency, human rights activists, politicians, academia among others thronged Moro to bid an eternal farewell to an outstanding comrade, who many described as always, “speaking truth to power”.

Representative of Eze Ndigbo and that of Delta State Government were also at the venue to pay tribute to a man who has always believed in a restructured Nigeria.

The event took off with the arrival of the corpse to the venue around 10:20 am which was carried into the venue by a pall-bearer dressed in traditional red and white attire while Yinka was dressed in wine coloured dress with his Afenifere signature cap.

The body was laid in a glass coffin for everyone to see.

His wife, Joe, accompanied the body into the Origbo Anglican Grammar School field, the venue of the event in the company of the President, Pentecostal Fellowship of Nigeria, Bishop Francis Wale Oke.

Joe took the pole position for the laying in state after which other family members follow suit before the gathering joined in the procession.

This was followed by the arrival of dignitaries led by Osun State Governor, Adegboyega Oyetola who entered the venue with Chairman Nigeria Governors Forum, Dr Kayode Fayemi after which the duo received Afenifere’s leader, Pa Ayo Adebanjo and their Oyo State counterpart, Engr. Seyi Makinde.

The Trinity choir added glamour to the funeral service with the praise and worship that preceded readings from the Bible.

Bishop Wale Oke in his homily recites from the Book of Luke 43, 39-43 and eulogised Yinka for not just living a life of service to humanity but also spend some of his time for his creator.

The Ooni of Ife, Oba Adeyeye Ogunwusi led other dignitaries who paid tributes to the fallen activist. Oba Adeyeye represented by Sooko Kemade Olagbaju described Odumakin as an uncommon son of Oduduwa.

“You were not only a worthy son of the House of Oduduwa. You lived Oduduwa land. You breathe Oduduwa. You worked tirelessly for Oduduwa. Your insightfully penetrative perspective on the Yoruba cause is uncommon. Neither is your incisively biting criticism of our steps, delivered impassionately”, he said.

He also disclosed that Moro-Ife road would henceforth be known as Yinka Odumakin Boulevard in honour of the late Afenifere spokesperson. While a chamber in the village, the monarch is building inside OAU would also be named after him. Ooni also presented a burst of Yinka to the family pledging that a bigger one would be built at the chamber at OAU.

Governor Fayemi mounted the podium after Ooni and described the late Yinka Odumakin as nationalist without question and a genuine Yoruba spokesperson, who despite his commitment to regional autonomy did not believe in secession.

“Even as Afenifere spokesperson, he was a democrat, he was a nationalist without question, he was never apologetic about the Yoruba agenda but he was not a secessionist. He was always clear about the path to development and why regional autonomy offered the best route to progress and development in our country.

Also, Governor Oyetola said the late activist did not live a wasted life.

“We should rejoice, knowing Odunmakin has left for a better place. He has left for us on this side of humanity a legacy of inspirational service, fierce loyalty to the Yoruba race and relentless contributions to the quest for a greater nation.

“He did not live a wasted life.

“He was an illustrious son of Osun and a man of deep conviction who constantly fought for what is right, just, and equitable. He simply lived for the people. He was a phenomenal leader, who, without holding public office, impacted us in unique ways”.

“I want us to take a lesson home, that a life lived on ideals, even if it does not have the trepid of fortunes or fame, will be a shining star if it lived to light the path of others that are coming behind and that is what Yinka has done for this generation.

The ideals he lived for, the struggle will always be a shining star for us until we get a country that will work for all of us. Yinka has concluded his own bit and it is left for us all to continue the struggle”, he said.

Afenifere’s leader Pa Ayo Adebanjo, who could not control his emotion during his tribute said but for an omnipotent God, he wondered why he is the one paying tribute to Yinka, who was just 54 while he, an older man still lives.

“He did great works for Yoruba land, the progressives and Nigeria. He was a rare gem not common among this generation. Yinka was consistent in fighting for the underdog, against injustice, he was an Awoist to the core.

“Afenifere is mourning a tireless fighter for human right. He worked without receiving the reward. Yinka is gone but Afenifere will consistently be with his children. The prayer for Afenifere now is that God should quickly give us replacement particularly at this time when the country is burning. What he stands for was daring, he speaks truth to power that is”, he said.

In her tribute, his wife, Joe Okei-Odumakin described how her husband survived a two-day coma after touring the country in Osun State.

“I will not forget on a Sunday, December 8, 2020, After touring almost all parts of the country, he was here, in Osogbo with his driver, Wasiu, who called me that he was exhausted and, probably due to extreme fatigue, he collapse and bled till daybreak.

“He lost about 16 pints of blood. It was a Sunday I can never forget, Governor Oyetola called me, the Chief of Staff to the Governor and the Chief Medical Director of the hospital also called, Yinka who was in a coma for about two days. But for God and all their intervention, Yinka did not lose his life that December.

After receiving five pints of blood, he wakes up and said he wanted to go see Pa Adebanjo in Lagos and the state gave him an ambulance. It was after that short visit to Afenifere leader in Lagos that he returned to the hospital to take 11 more pints of blood”, she said.

After the tributes, the body was taken to his country home at Ewuru street, around 2:30 pm where only immediate family members, clerics and the media were allowed to participate in the programme. His body was lowered into mother earth around 3 pm after brief graveside burial rites.j

Yinka Odumakin recovered from coronavirus a week before his demise – wife