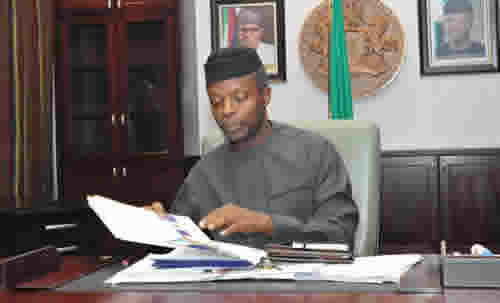 Vice President Yemi Osinbajo has petitioned the Inspector General of Police, Mr Abubakar Adamu, over alleged defamatory publication made against him by an online Journalist, Jackson Ude.

The vice president who viewed the publication as an attempt to malign and disparage his person urged the Inspector General to immediately investigate and commence criminal proceedings against Ude so as to stop further malicious publications against his person.

Ude, who publishes PointBlank News had in his publication of July 8 alleged that Acting Chairman of the Economic and Financial Crimes Commission (EFCC), Mr Ibrahim Magu, who is currently being investigated for corruption had told the presidential panel how he gave Osinbajo the sum of N4 billion out of the N39 billion he allegedly embezzled from recovered loots.

But in a swift reaction, the vice president in the petition to the IG through his lawyer, Professor Taiwo Osipitan SAN, condemned the publication as falsehood that have, “elicited responses targeted at the Vice President ranging from shock, outrage to comments that cast aspersion on the integrity of the Vice President”.

In the petition dated July 8, 2020, the vice president said that Mr. Ude on same July 8, wrote and published on his website www.pointblanknews.com materials/stories which were criminally defamatory of his person.

“In the said online criminally defamatory publication, titled “How Magu Embezzled N39billion, Gave Osinbajo N4billion, Begs For Soft Landing”, which is available at http://pointblanknews.com/pbn/exclusive/how-magu-embezzledn39billion-gave-osinbajo-n4billion-begs-for-soft-landing/ Mr. Ude wrote and caused to be published the following about our Client and the Acting Chairman of the Economic and Financial Crimes Commission, Mr. Ibrahim Magu:

“Embattled former acting Chairman of the Economic and Financial Crimes Commission, EFCC, allegedly embezzled over N39billion and gave Vice President Yemi Osinabjo (sic) N4billion, after the VP gave instructions to him to release some of the recovered loots, Sources within the panel investigating the former EFCC boss told Pointblanknews.com”

“Specifically, Magu was said to have mentioned a N4billion that he released to the VP based on directives the very day the president left the country for the United Kingdom on medical treatment”, the lawyer said.

Other alleged offensive publication, Ude was alleged to have made against the vice president on his Twitter account with the handle @jacksonpbn include;

“HushBajo. N4billion. The Ghana investment. Okechukwu Enelamah the errand boy. The secretly recorded night vigil prayers at the Villa Chapel. The Letter of resignation written for Buhari in Tunis by Tinubu/Osinbajo while Ba was sick. The scheming to take over. Etc. This na pay back”.

Professor Yemi lamented that tweets and reactions from the said online publication have also been circulated widely on other social media platforms including Facebook and WhatsApp, as well as other online websites including Newsreel with the caption “EFCC PROBE: VP Osinbajo Allegedly Indicted Over N4billion Recovered Loot Diversion” available at HERE.. and YouTube at

“Our instruction is that the above statements published by Mr. Ude are false in every material respect and same are designed to injure the reputation of our Client. Copies of the publications are hereby attached for ease of reference and necessary investigation.

“These vicious and malicious publications are meant to achieve one objective only, to represent to his readership and others (Nigerians and Foreigners) that our Client is a dishonest and disloyal public officer and consequently unfit for the position of Vice President of the Federal Republic of Nigeria which he is occupying.

“We are of the view that unless an action for criminal defamation is commenced against the said Mr. Jackson Ude, he will continue to use his social media platform to publish materials that are false and criminally defamatory of our Client’s reputation.

“In view of the above, we humbly request that you cause the above allegations, made against our Client, to be investigated and if the suggested investigation confirms our complaint of the falsehood of these allegations, to initiate criminal proceedings pursuant to the provisions of Sections 391 — 395 of the Penal Code Act for Criminal Defamation against the said Jackson Ude”, the petition read.