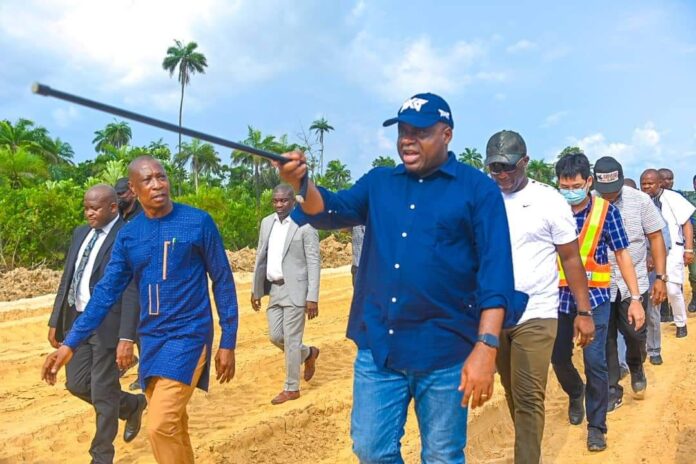 The present administration of Senator Douye Diri in Bayelsa State is building on the dreams and aspirations of the founding fathers in the area of meaningful planning, development and Investments irrespective of class or party affliations.

In less than two years, Governor Douye Diri’s gradual and sure style of administration has brought into governance transparency, accountability and equitable distribution of wealth.

This has propelled the construction of roads and other physical infrastructure across the length and breadth of the State.

Bayelsa, which hitherto was referred to as forest capital, has become the hub of development, peace and security. It has led to a silent revolution in the area of infrastructural structures, sports development, health and educational facilities, above all the desired investment destination for corporate and Government institutions.

Already, the people of the State, particularly those in political party opposition, have become enchanted by the huge successes recorded by the Prosperity administration to open Bayelsa to the nation’s business community and the world through steady and focusses investment profiling and transpency.

Unlike in the past, the steady rising investment profile of the State under Governor Douye Diri can easily be accessed through available devices. Some of the most visible attractions of the Prosperity Government include the ongoing construction of the Sagbama-Ekeremor road, Yenagoa-Oporoma road, the ongoing igbedi road, the completion of Nembe Unity bridge, completion of the Isaac Boro Expressway, redesign and beautification of Edepie/Etegwe roundabout, the Igbogene/Elebele/AIT Outer ring road and the commissioning of the mega International Airport, just to mention just a few.

Despite the temptations among poitical leader, if anyone decide to use the legacies of the Prosperity Government as an index to measure the commitment of Senator Douye Diri to developing Bayelsa State, one might not be able to identify the Senatorial District he hails from because projects are evenly distributed across all the three Senatorial Districts.

The Prosperity Team has transformed lives and empowered a good number of farmers, market men and women, students, youths, including the equitable distribution of loans and grants to activate the direct and medium term economic activities in the state. Many Youths are being handed free training on entrepreneurship skills to mop up unemployed percentage in the labour market and reduce crime and criminality in the state.

The governor takes actions that are unpopular among political office holders by personally inspecting ongoing projects across the State.

Recently he said of some of the projects, “The company handling the Yenagoa-Oporoma road, China Civil Engineering and Construction Corporation, is doing well and keeping to the terms of the contract. We are all impressed by the job that is ongoing.

Senator Diri also asserted that all other ongoing construction work, especially the three senatorial roads, are his priority projects and would go the extra mile to partner multinationals in actualising them.

“So far, of the three senatorial roads, work is going on speedily in the West and Central districts but yet to commence in the East. The reason is known by all of us but as a government we want to start something there.

“We have done our best to involve the international oil companies there, particularly the Nigerian Agip Oil Company, and the Federal Government. But if the responses do not come as expected, I think we still have some surprises there.”

The governor is excited that a number of the ongoing projects would be ready before the second anniversary of the current administration.