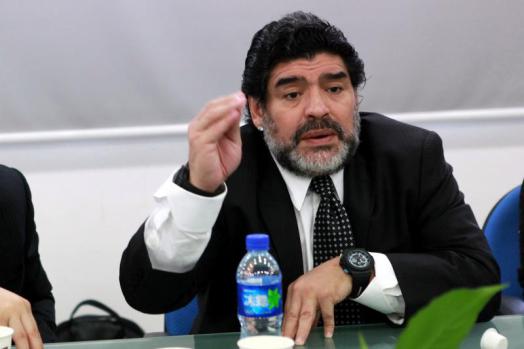 #NaijaLiveTv
Diego Maradona has requested a meeting with Argentina players in an attempt to inspire the struggling squad ahead of their crucial final World Cup group game against Nigeria on Tuesday.

The two-time world champions must beat Nigeria in Saint Petersburg on Tuesday if they are to avoid a premature exit from the World Cup following a disastrous 3-0 defeat by Croatia.

He said he would bring along other Argentina greats of the past for the motivational talk.

“I would love to hold a meeting with them, with (Nery) Pumpido, with (Sergio) Goycochea, with (Claudio) Caniggia, with (Pedro) Troglio, even with (Daniel) Passarella if he wants to come, and with (Jorge) Valdano,” Maradona told Venezuelan TV channel Telesur.

“We’re going to defend our honour, boys. It cost us too much to be where we are for Croatia to come and hit us for three goals and to leave with our arms crossed without anyone putting a foot in.”

“I’m furious and very upset inside, because anyone who wore that (Argentina) shirt can’t see it being trampled like that by a Croatian team that isn’t Germany, that isn’t Brazil, that isn’t Holland or Spain,” he said.

“But there is a guilty party and the culprit is the president of the AFA. Everyone just accepted it when Sampaoli came in with computers, with drones, with 14 assistants.

“I think there is a total lack of authority on Tapia’s part.”

Nigeria adopted similar tactics after they were beaten in their group opener against Croatia, with the likes of Segun Odegbami and Kanu Nwankwo rallying and giving the players all the pep talks before the Iceland match.