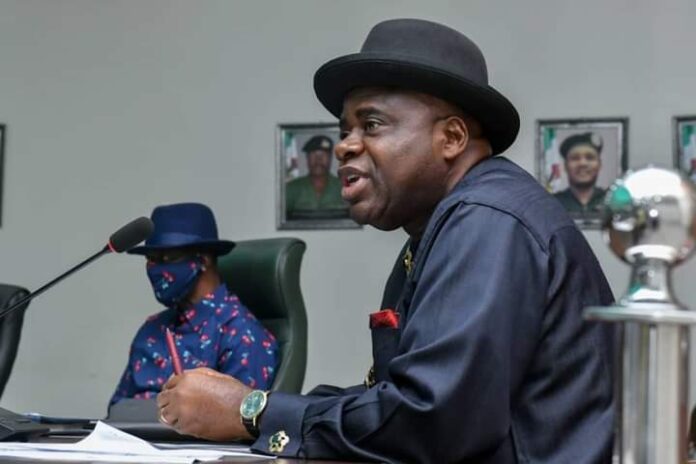 The Bayelsa State Governor, Douye Diri has hinted that the Brass-Nembe Road project valued at N100billion will soon be ready.

The claim was collaborated by the members of the Federal House of Representatives members led by the Bayelsa Caucus Chairman, Hon. Fred Agbedi.

Governor Douye Diri, made this known on Sunday at a special Thanksgiving by the member of Federal House of Representative representing Nembe-Brass Federal Constituency, Hon. Isreal Sunny-GOLI at the Church of Nigeria, Anglican communion of the Diocese of Niger Delta West,Brass Archdeaconry.

Diri assured the people of the state that his administration is working with Federal Government for quick completion of the road project.

Gov. Diri, who was represented by his Special Adviser on Political Matters, Chief Collins Cocodia, said the State Government and the political elite from Brass kingdom are working assiduously for the Nembe-Brass to be completed soonest.

He commended the people of Brass Kingdom for the existing peace and predicted that the peace existing in Nembe and Brass will last” We shall see the completion of the road soon. The Political elites from Brass and Nembe knows how to play good and peaceful politics. And they are collaborating with the state and Federal Government for quick completion of the road. “

Crroborating the position of the State Governor, the member of the Federal House of Representative representing Sagbama/Ekeremor Federal Constituency, Hon. Fred Agbedi said the national Assembly member from different political divides are also supporting the State and Federal Government to actualise the construction of the Brass Road project.

He assured the people of the state that despite the struggles accros political divides during elections, “the representatives of various political parties are one when it comes to the development of the state. PDP and APC are united in the National Assembly. It is to tell you that if it by political party agenda, we will not get development.”

Agbedi also commended the celebrant, Hon. Isreal Sunny-Goli over performance, declaring that his penchant to support development to the state.