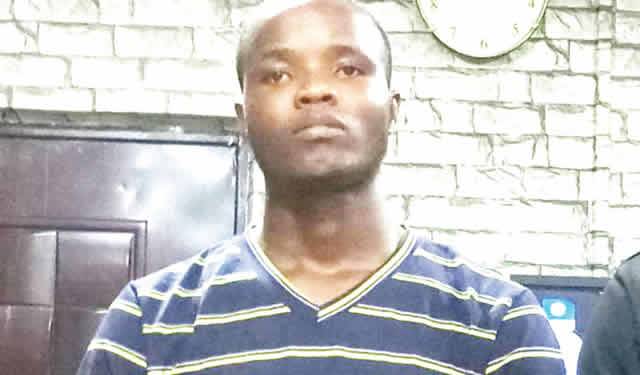 The Lagos State Police Command has arrested one Joel Asabor for allegedly defrauding some Nigerians through a fake recruitment into the Nigerian National Petroleum Corporation.

PUNCH Metro learnt that Asabor, who was based in Delta State, impersonated the Senator representing Anambra South Constituency of Anambra State, Andy Uba, in whose name he opened a Facebook account.

Through the Facebook account, the suspect reportedly conversed with job seekers who added him as friends on the platform.

Our correspondent gathered that the victims were asked to pay between N200,000 and N350,000 for processing of employment into oil companies, as they were promised juicy incentives, including a salary of N850,000 per month.

It was learnt that the suspect, whose accomplice also impersonated a member of the House of Representatives, Nkiruka Onyejeocha, defrauded a Lagos resident, Mrs Chinelo Nwadim, of over N300,000

A source said the victim had trusted the Facebook account after receiving fake recruitment forms of the NNPC.

He said, “The woman met the suspect on Facebook in December 2017. He used the name of Senator Andy Uba to open the account. He told her that he had influence in the NNPC and could get her a job there. The woman jumped at the offer.

“He promised her a direct reference with the sales manager of NNPC so that she could get the recruitment form with ease. He also sent her a reference code and promised her that Honourable Nkiruka would call her to assist with the processing.

“The fraudster promised to send a recommendation letter to the office of Honourable Nkiruka so that she could get the job.”

The source said the suspect, while still impersonating Uba, instructed the victim to make all payments through his accomplice, Nkiruka.

He allegedly advised her to pay N35,850 for the form, assuring her that her monthly salary would be over N850,000.

“After their conversation, the said Honourable Nkiruka contacted her and demanded different sums of money which she paid into a First Bank Account belonging to Asabor Joel. She paid N35,850 for the NNPC form; N28,500 for acceptance form; N45,850 for insurance and N220,000 for passport.

“When N450,000 was demanded for a visa fee, it became clear to the victim that she had been defrauded. She also discovered that all the documents sent to her were forged; that was when she petitioned the area commander through her lawyer,” the source added.

He explained that investigation showed that a lot of Nigerians had been defrauded by the suspect.

He said, “When the report got to the command, the Commissioner of Police, Edgal Imohimi, directed the Mushin Area Commander to fish out the culprit. A police team travelled to Oghara, Delta State, where the leader of the syndicate, Joel Asabor, was arrested and brought to Lagos.”