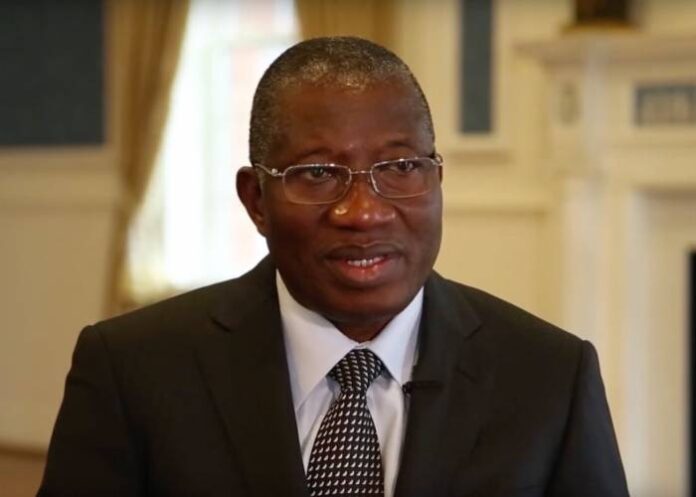 It took the quick intervention of battle-ready security details to disperse jubilant Nigerians that held ex-president Goodluck Jonathan for some minutes, acknowledging his presence at the 50th birthday bash of the former Minister of Aviation, Osita Chidoka, in Abuja on Sunday.

Jonathan, had stepped out of the venue which hosted political heavyweight across party line by exactly 4.12pm escorted by the celebrant and some dignitaries but on entering his official car, the crowd hailing him, surrounded the convoy, preventing it from leaving for some time.

Shouting presido, presido, good man, come back, etc, they had stood their grounds until the security details intervened, dispersing them to allow the convoy leave, which almost resulted in stampede.

Speaking earlier during the reception, ex-president Jonathan had showered encomiums on the celebrant, describing him as a special person and gift to his state Anambra and the nation.

While advising the President Muhammadu Buhari-led federal government on how to tackle insecurity and corruption, he said that they require top quality programmes, advanced technology.

“The celebration of 50th birthday of Osita shows that he is a special person. So, it is a happy moment for all of us. Osita Chidoka is a blessing to the nation and those close to him know him very well.

“I didn’t know him until when I got involved in politics and get to Abuja as a Vice President and when I took over after I lost my President. I have seen in him as lots of talents, very talented and very strategic. And he is somebody that really go for a number of things.

“And look at how Osita has made this programme very unique. He is a gift to Anambra State, he is gift to Nigeria and we wish him well. Very unique date,” Jonathan said

On tackling insecurity, he noted: “The day you (Osita) were born was the day armed robbers were first shot in Nigeria, it speaks a lot. Very unique.

“Luckily you are not an armed robber. But gone were the days when armed robbers were being shot. Also is the crimes in the society, with the cases of armed robbery and others going on now shows clearly that bullets alone cannot stop it or other criminal activities in human beings.

“It requires top quality programmes of government, it requires technology, it requires a lot to stop armed robbery and all forms of crimes, including corruption that we talked about every day because it is difficult to stake a rule and thinks that that would solve the problems.

“As you are killing armed robbers, others are robbing the pockets in the same arena and that is the kind of society we are in today. Things are becoming more complex with the introduction of IT that is now ruling the world,” he quipped.

The ex-president further noted: “Osita has now call us to come and celebrate his 50 years on earth. He has achieved results. He became the Corps Marshal of FRSC and brought a lot of innovation, technology and ingenuity into the FRSC. He is somebody that can turn things around.”

In his vote of thanks, the celebrant had reflected on his life journey, paying special commendation to his former boss, Late Ojo Maduekwe and Arthur Eze, who he revealed did not only facilitate his appointment as the Minister of Aviation, but also played important role in his journey up the leader.

The celebrant who distributed over N6.5 million to children born across the country on Sunday and announced the N15 million donation from Arthur Eze to his church in Abuja, thanked President Jonathan, Minister of Labour and Employment, Dr Chris Ngege, Senate Minority Leader, Senator Enyinnaya Abaribe among others important dignitaries in attendance to celebrate him and with him.

“I am recounting all these stories about my life because I want to new generation to know that everything is not about money. You can deceive people and collect money today, but you cannot go far with it. Start with relationships and people will remember you when opportunities come.”